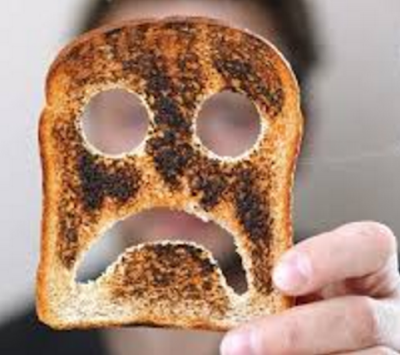 At the start of this week, Britain woke up to the terrible news that dark toast and roasted potatoes can trigger cancer. Apparently, when we overcook starchy foods, a dastardly chemical is released. It is called acrylamide. Government scientists advise us to eat lightly golden toast and less crispy roasted potatoes. We are further advised not to store potatoes in our fridges as this curious habit can also encourage the production of the dreaded acrylamide. See link

I must confess that before the news broke, I had never encountered the word acrylamide before but since I heard it I have not been able to sleep - tossing and turning, my head filled with pictures of slightly burnt toast and roasted potatoes and worries about contracting cancer. In my life I have eaten many loaves worth of burnt toast and a house-sized pile of roasted potatoes. Perhaps it is already too late for me. Even as I write this blogpost the cancer is probably already gnawing away at my insides!

Over the years there have been many health scares connected with foodstuffs. For example, we were once advised to make sure that we always peel carrots as carrot skin can absorb traces of the pesticides used in modern farming. Those pesticides are carcinogenic.

It's the same with processed meats and sausages. According to The World Health Organisation, each 50g of processed meat a day - the equivalent of one sausage, or less than two slices of bacon - increases the chance of developing bowel cancer by 18 per cent.

There's no hope for the human race. Everywhere we look there's cancer-inducing danger. In fact we might think of a supermarket as the place you go to gather the stuff that will kill you.

And here's the latest horror story - hot off the press. Scientists in the Department of Food Health at Gullible State University in Utah, USA are warning that  too much consumption of fresh water can cause excessive urination. Apparently, drinking three pints of fresh water in an hour can stimulate powerful urination urges. Frequent urination can be injurious to health as each act of urination causes the body to expel vital digestive salts that protect the stomach and bowels from cancer-inducing elements contained within  any  normal diet.

We are advised to drastically reduce our water intake, replacing water with other liquids such as beer, wine and Coca Cola - a benevolent little American company which  kindly sponsor the Department of Food Health at Gullible State University. By the way, it is even claimed that a litre of Coca Cola a day will counter any of the ill-effects caused by casual acrylamide consumption.
- January 25, 2017