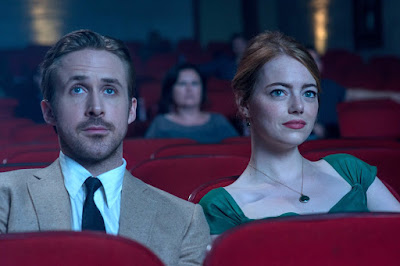 
You know how it is. You go to watch a film with someone and afterwards when you have negotiated your way past the other cinemagoers, one of you says, "What did you think?" Well I went to see the much-acclaimed "La La Land" on Sunday with Mrs Pudding and it turns out she had been surprisingly underwhelmed by  the spectacle while I thought it was delightful with beautiful imagery and a fluidity both in the storyline and the camera work.

"La La Land" sounds like it might be the place where we are all currently living but up there on the screen it was a beautiful, light-hearted place of song and dance, a place where dreams can come true and where there are many subtle nods to the history of Hollywood and its musicals.

At its centre there's Mia played by Emma Stone and Sebastian played by Ryan Gosling. She is a wannabe film actress and screenwriter while he is a frustrated jazz pianist. Their lives collide and they find love. It's a familiar story.

The Los Angeles background to events is a clean and underpopulated place of happiness and hope. No down and outs pushing trolleys, no smog hanging over the city like  a quilt - but you wouldn't want that. It's not that kind of film. This is a joyous fantasy.

A  musical thread runs through the show, "City of stars, are you shining just for me?". It kept echoing, linking the developing plot as Mia and Sebastian find themselves in a dramatic battle between ambition and the heart.

There were so many lovely images. Our two stars dance amidst the stars and upon stars reflected in water. They visit the famous Griffith Observatory which featured in, amongst other films, "Rebel Without A Cause". They see live jazz and the lights of Los Angeles twinkling in the valley below. Yes, it's quite, quite lovely. A beautiful escape from this other "la la land" of Trump and Brexit and drowning refugees. At least that is what I thought.
- January 17, 2017