Earlier today, while walking in the post-industrial environs of Staveley, North East Derbyshire, I spotted this graffiti on a gateway:- 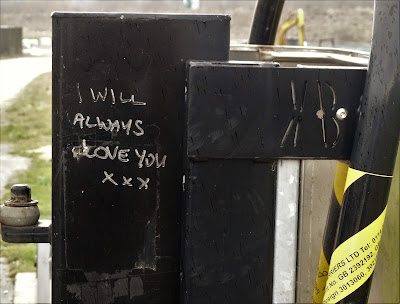 "I Will Always Love You" is not just the title of  Dolly Parton's great song, it is also a line that is communicated by many people at some stage in their life. The words might be written or spoken but in this instance they appear in silver-white writing on a gate that leads to a land reclamation project at Staveley Town Basin - once an important staging post on the old Chesterfield Canal.

Having closely witnessed the handwriting habits and styles of thousands of teenagers, I would say that this particular declaration was made by a teenage girl aged between thirteen and sixteen. Was she with the object of her affections when she scrawled the message or did she expect him/her to see it when walking along that same path?

In Dolly Parton's case, the sentiments contained in "I Will Always Love You" related to her breaking up with her lover and professional partner Porter Wagoner. Singing those five words back in 1973 was a way of saying goodbye. And I think that is rather sad. "I will always love you" should not be goodbye words  but an affirmative declaration filled with hope for the future.
- January 23, 2017