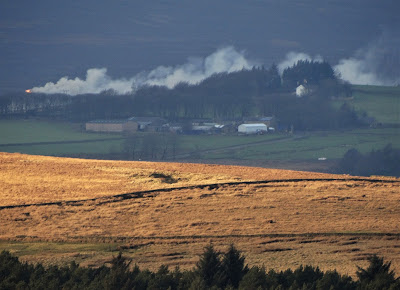 Yesterday, after the hullabaloo of The Laughing Horse Awards had dissipated somewhat, I drove off to Rud Hill for fresh air and a little downtime. 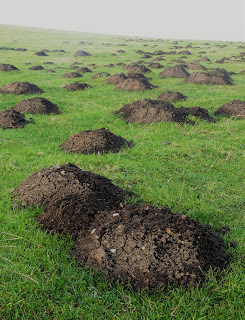 It was cold and breezy up there as I looked out upon the dying light of the old year. A surfeit of molehills (right) peppered the last sheep pasture before rough open moorland begins. It was as if the green sward had suffered a barrage of mortar bombs. And I thought about those industrious little creatures tunneling beneath my feet in search of earthworms. Once I spotted a weasel up there. He darted into a drystone wall and paused to inspect me with his fierce blackcurrant eyes. But that was in summer T-shirt weather.

Beyond the three reservoirs at Redmires and over The Hallam Moors I could see a fire burning at Moscar Heights (top). Meanwhile to the north east, sunlight spotlighted the centre of Sheffield one final time before the dawning of 2017.

In the gloaming I drove home. It was pitch dark when we ordered a Chinese takeaway from "The New Hing Lung" on Abbeydale Road - a New Year's Eve treat. Frances was going out to a party and we were going down to the local for a knees-up, a few beers and a raucous rendition of  "Auld Lang Syne".

Indeed, more than in other recent years it's surely the right time to drink a "cup o' kindness" as we enter the unvisited plains and the rolling valleys and hills of 2017. Let us hope that when these next twelve months have passed by we can all look back on happier times for our Earth. Happy New Year Everybody... Happy New Year!
- January 01, 2017