It is easy to get names mixed up. For example, our lovely daughter Frances often finds her name being mis-spelt in the masculine form - Francis. I guess that all Franceses and Francises have to battle with this - like all Lesleys and Leslies.

Very recently, over in Washington D.C., our esteemed prime minister was visiting that  Trump thing. You probably noticed this on your television screen or computer. It seems that in some of the official U.S. documentation, Theresa May's first name was wrongly spelt in the alternative manner - Teresa.

This was a very embarrassing mistake because there is in fact an English glamour model called Teresa May. In 1997, she appeared in the music video for The Prodigy's single "Smack My Bitch Up". She moved into acting later in her career in B movies such as "Exterminator City" and "One Man and his Dog". In addition to films, this alternative Teresa May has appeared in numerous tabloids and men's magazines including "Hustler", "Men Only", and "Razzle". Yes - this other Teresa May has been around the block and for that reason, I suspect that she is the kind of woman that The Donald is more used to dealing with.

He must have been very excited sitting behind his desk in The Oval Office, flicking through back copies of  "Hustler", waiting for Teresa May to turn up. Instead he got this Theresa May:- 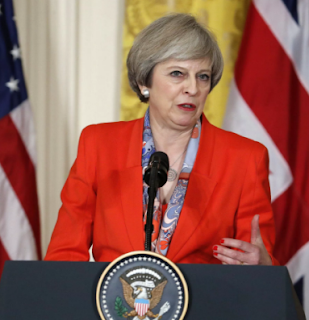