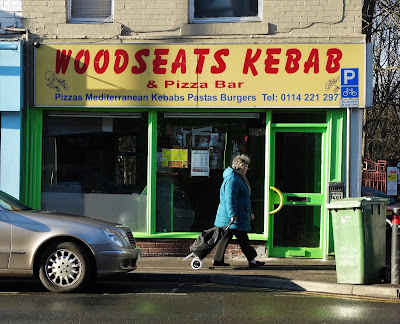 Yesterday morning was bright and shiny but because of my afternoon Oxfam shop shift, there was no time to drive out into the countryside for a nice long ramble. Instead, I decided to have a stroll round one of Sheffield's southern suburbs - Woodseats. It's only a couple of miles from our house.

Mt top picture is in the style of The 2016 Blogger of the Year - namely Steve Reed of Shadows & Light. He often shows us shopfronts with people passing by them.

I passed "The Chantrey Arms" and snapped the pub sign:- 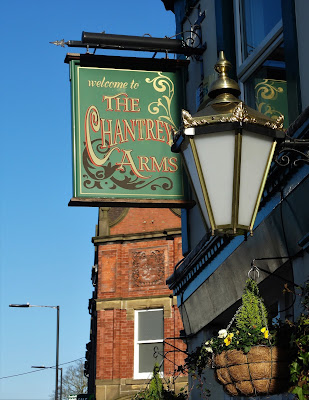 I wandered up the hillside towards another suburb - Norton Woodseats and on the way  I snapped these Edwardian semi-detached houses. Beyond them there is a magnificent view over south Sheffield - looking in the direction of our house:- 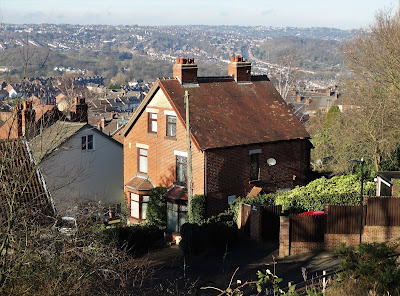 In Woodseats there are several streets of brick-built terraced houses. The street below is called Nettleham Road:- 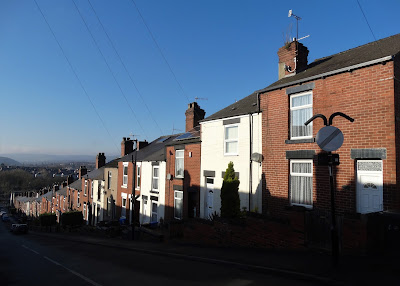 To get to the little back yards and gardens there are covered passageways between the houses. Below there is a random example of what I mean:- 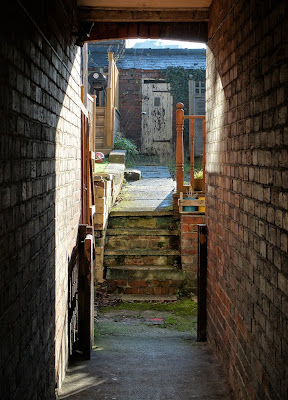 I thought I might treat myself to lunch at The Woodseats Palace. Beforehand, I nipped into a charity shop and bought a book about watercolour painting for fifty pence. I could read it while waiting for my order to arrive - a brunch consisting of two fried eggs, smoked bacon, sausages, baked beans and chips (french fries) with a mug of coffee. Delicious and not too much acrylamide either.

Before heading back to my car, I spotted these two amigos outside "Dos Amigos" - an Italian/Mexican restaurant. They were probably weighing up the merits of burritos as compared with ravioli. 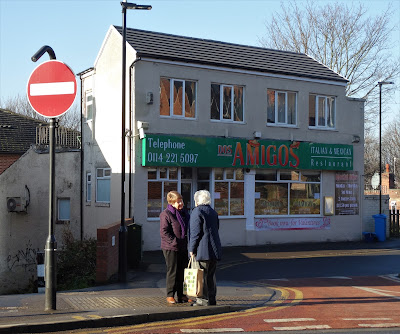 And so back home - car safely parked and  I was off down the hill to another shift at Oxfam. It had been nice to get out in the morning - taking advantage of the weather instead of sitting on my buttocks squandering time on the internet.
- January 26, 2017