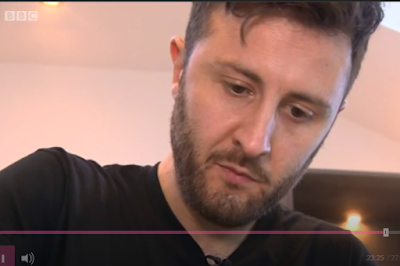 This month isn't just January, it's Veganuary. Organisations such as The Vegan Society are encouraging people to enjoy a meat-free month, consuming plant-based dishes and even avoiding eggs, cheese, fish and butter.

Now as some of you may recall, our son Ian became a vegan a couple of years ago. For the past six months he has been working with "Jungle Creations" in London, producing a series of vegan recipes that are displayed on a Facebook page called "Bosh!". Go here. 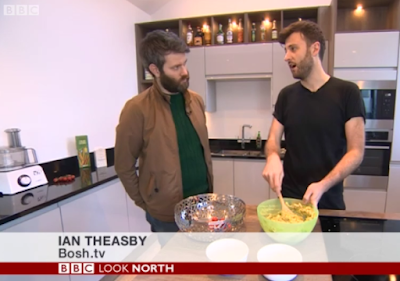 Some of these recipes, revealed in fast-paced video clips, have received well over a million hits. Usually, it's our Ian's hands you see in the video clips. He has invented or adapted all the recipes and it's his drive and creativity that is currently making Bosh! successful. Of course it helps that there is a growing interest in vegan cooking and the attitudes that underpin veganism.

Here in Yorkshire, our local BBC TV  news programme is called "Look North". As well as serious news stories they like to include what you might call magazine features - no doubt to counteract all that gravity. Yesterday, they wanted to do a feature on Veganuary. 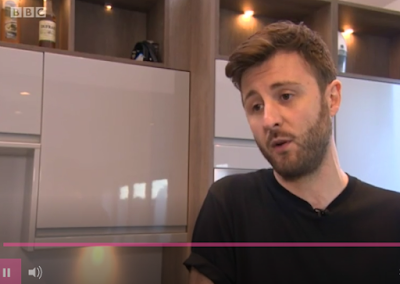 Having been interviewed by BBC Radio Sheffield on Monday, Ian was invited to play a leading role in the "Look North" item. He prepared a simple vegan recipe in a friend's spacious modern kitchen and the food was later enjoyed by James Vincent - the BBC reporter. The item also included a cut to Sheffield's Moor Market where two or three older Sheffielders were quizzed about the idea of becoming vegan. Naturally, the idea didn't go down too well with them.

The item included a clip from Bosh! and Ian came across pretty well. It's another feather in his cap as Bosh! advances into the future. There is even talk about a publishing group building a new vegan recipe book on the back of all the interest that Bosh! has engendered. But of course that remains to be seen. So far so good. 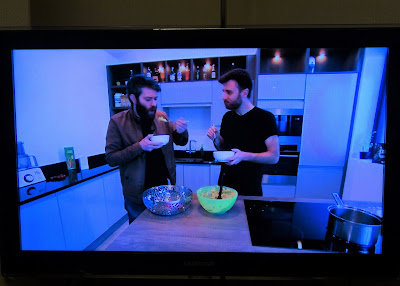