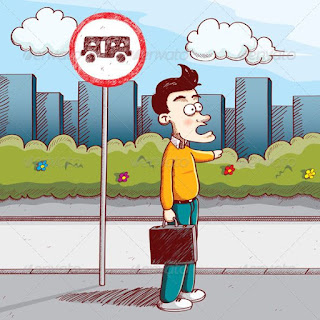 Years ago I was waiting at a bus stop on Ecclesall Road in Sheffield, As the bus approached, I could see that two passengers were moving along to the driver's perspex cab. That meant the bus would be stopping so I didn't bother sticking out my arm.

When I got on the bus ready to pay my fare, the driver said, "If you want a bus to stop mate, you should stick your arm out!"

"But I could see two passengers were getting off here."

"It doesn't make any difference, You've still got to stick your arm out."

Two weeks later, I was standing at the same bus stop. A number 88 appeared and once again I could see that a couple pf passengers were approaching the bus's exit door. Nevertheless, I stuck my arm out, remembering what the bus driver had said several days before.

When I mounted the bus ready to tender my fare, the driver spoke to me.

"Didn't you see that there were people getting off?"