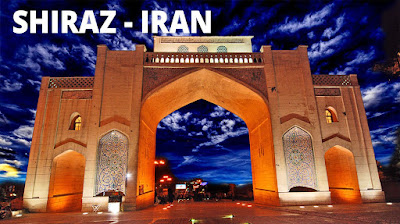 Down at my local Oxfam shop, the manager employs a wide range of volunteers. For example, some have mental health issues, some are asylum seekers and some are super-normal well-balanced intellectual giants like me!

A few weeks ago, I was introduced to a tall and well-groomed gentleman called Aman*. He is about forty years old. I was asked to give him some till training.

After the shift, I walked homewards with Aman and he told me his story.

It turned out that he was from the city of Shiraz in Iran. Over several years, he found himself at odds with Islam even though he had grown up in a traditional Muslim home. He went through the motions but secretly he was turning to Christianity. This is not a belief system that meets with much approval in Iran - either from the hardline Islamic government or from the fervent stewardship of neighbourhood vigilantes. But Aman kept quiet, outwardly living a lie and even praying at the mosque.

Perhaps he would be all right. He had his own small business in Shiraz though I didn't find out its nature. Gradually, rumours began to spread about Aman's behaviour and the people he had been associating with. It was a scary time. Then one day, as he was heading home from work,  a young neighbour told him that the police were at his parents' house.

Aman knew that they had most probably come for him. He could easily end up being tortured or even killed. The very best he could expect would be years in prison. This is the price you pay for being a Christian in The Islamic Republic of Iran. So Aman waited till the police had gone and after tearful goodbyes with his family he fled.

He fled northwards to the border with Turkey, somehow got across it and managed to make his way to the Mediterranean port and tourist resort of Kusadasi. There he gave all the money he had to people smugglers. Late at night, he was forced into a flimsy inflatable boat at gunpoint along with thirty or more refugees from different countries.

Fortunately, the sea was calm that night and they were able to voyage safely to the Greek island of Samos.

He remained on Samos for several months after registering with the authorities there. Aman said the conditions were awful. It was rather like being in prison but finally he gained permission to leave the island and travelled to mainland Greece.

After Greece it took three weeks to make his way to Calais in France, through Serbia, Hungary, Austria and Germany.It was a terrible and challenging journey but not as frightening as the hours he had spent on the inflatable boat.

At Calais, he slept in the notorious Jungle encampment but a few days after arriving he climbed into a goods lorry that was bound for England and arrived here safely the next day. He officially sought asylum in London and was then transferred to a holding centre in Manchester or Liverpool - I forget which.

After two months there and with his asylum request now being properly processed he was able to come to Sheffield to join his brother and his sister-in-law.

It's about a mile to the top of Ecclesall Road from our house. In that distance I had heard a living, breathing, real life asylum seeker's story. There were other questions I would have liked to ask, colouring in the pictures but I haven't seen Aman since that October evening. He works on Thursdays now, still not allowed to take on a paid job because of the conditions of his asylum seeker's status.

Of course we have seen it all on our televisions. Crowded inflatables in the Mediterranean. Barbed wire camps in Greece. Massing at European borders, filthy conditions at The Jungle and desperate men trying to board lorries that would bring them to England. But to hear it all from the mouth of an asylum seeker who completed such a journey - well it made it all seem so much more real. No doubt  I will see Aman again and in spite of myself I will ask more questions. It is a hell of a story. A story of our times.