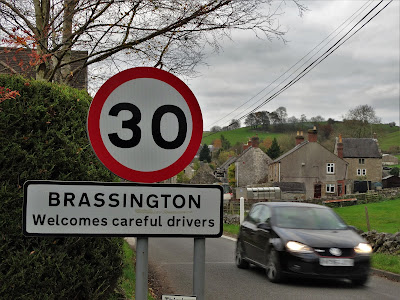 What is it with these weather folk? On Wednesday, they were telling me that there would be a lot of sunshine in our region on Thursday but when Thursday morning came, they had changed their tune. Now they were forecasting a day of cloud cover. Is it possible to sue meteorologists for breach of promise?

Should I stay or should I go? At least there was no indication that there would be any rain. I had an interesting eight mile walk planned but beforehand I would have a fifty minute drive down to the Derbyshire village of Brassington. Perhaps I should have saved that walk for a sunny day but I decided to go anyway.
I had parked up on Well Street in Brassington by eleven o'clock. As I was donning my boots I eyeballed the nearby pub - "Ye Olde Gate Inn" which American and antipodean visitors to this blog may wish to note was established in 1616. Apparently, there are some oak beams in there which were taken from ships belonging to the Spanish Armada. 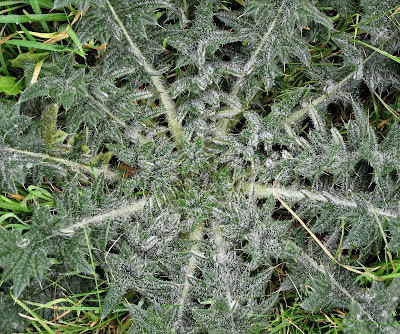 But your trusty correspondent had no intention of whiling away the afternoon quaffing jugs of foaming beer in a historic village pub. Instead, I set off on my long circular walk heading west then north to the former High Peak Railway, then east to Harborough Rocks, south to Carsington and then westwards back to Brassington.

I must apologise for the accompanying photographs. On a bright, sunny day they would have been sharp and colourful but on a grey, overcast day they emerge looking rather washed out. I guess there can be a certain subtle attractiveness with such pictures but I prefer to see the scenes around me illuminated nicely by the big spotlight in the  sky.
- November 03, 2017