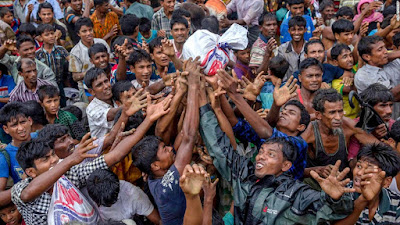 I had a dream.

We were carrying children and the elderly through lapping waves to the tenders bobbing in deeper water.

Out there in the bay off  Kolatoi Beach three great ocean liners were waiting to greet them. One of these huge ships was the "MS Harmony of the Seas" - the biggest ocean liner in the world. Requisitioned by The United Nations, it had sped from The Bahamas to The Bay of Bengal in record fast time.

On Kolatoi Beach, the people waited patiently. They had little energy and many were traumatised. They had seen so much. So much horror. The rapes. The slicing of machetes. The cruel swinging of babies. Their heads smashed into trees or concrete.

Those who survived had to leave. They had no option. They took whatever they could carry and fled.

In my dream, we gathered them all from the beach and followed them to the ocean liners where other volunteers awaited them. Teams of medics, psychiatrists, counsellors, cooks and waiters. There was clean water, proper bathroom facilities and clean clothes. We guided the survivors to their cabins and witnessed some of them  cry tears of joy. An old woman with thin, bony fingers clutched my hand and held it tight.

Where the displaced Rohingya would go after this humanitarian operation we did not know. Surely they could never go back to Burma (Myanmar) could they? Not after what had happened.

Later, standing on the beach, we watched the liners steam away over the horizon to a new future...We had done our bit.