It looked fine on my map of The White Peak. I would travel via Youlgreave to Dale End, park up and walk south through Gratton Dale, thence to Elton Common and down to Elton itself before returning to Dale End via Gratton Lane.

But maps do not show everything. The first part of Gratton Dale was no problem. I passed an old lime kiln and observed the sapphire blueness of the sky as I rambled along, happy to be out in the countryside once more.

After a few hundred yards the path through the valley started to become rather muddy. I kept to the margins sometimes striding from rocks to firm green sods. "I'll just get through this", I thought to myself, "I'll soon be back on solid ground".
I noticed hoof marks in the mud - evidence that  as well as occasional ramblers, cattle also used this this pub;ic right of way. They had really churned it up and in places the mud was knee-deep. At the sides of the path there were hawthorn and rosehip bushes, meaning there was no escape from the mud.

My progress was reduced to a snail's pace as I tried to avoid two things - the cloying mud and the very real possibility of falling down in it. When I thought I had reached the end of the mud, I looked ahead and there was more mud. It was awful. It went on for half a mile or so.

Finally, the mud began to recede as the path climbed up towards Mouldridge. What a relief! But as I turned another hawthorn bend what did I see? No! Not more mud but The Guardian of the Path!
It was a young bullock who had somehow got away from his little herd and appeared lost and jittery. He jumped whenever I moved and blocked my way. For a moment, I thought of turning back but another half a mile of mud! I would rather take the risk of being trampled to death by a frisky bullock.

Bravely, your intrepid correspondent edged past the snorting  Minotaur and up out of The Valley of Death in which The Quagmire of Bovine Revenge has consumed countless walkers in fancy cagoules and hiking boots.

After Gratton Dale the walking was much better and I saw some lovely sights, including these two tumbledown barns on the edge of Elton Common... 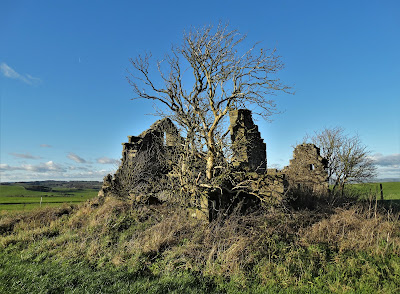 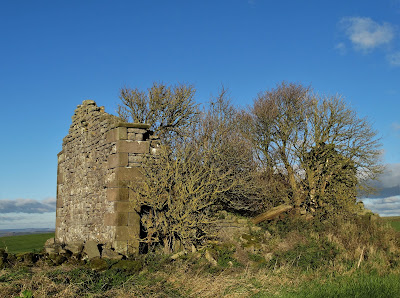