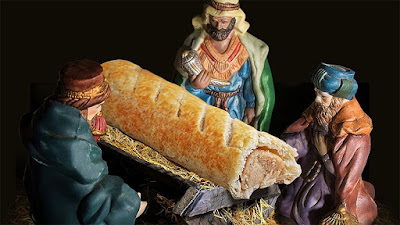 In promoting their scrummy advent calendar, high street bakers Greggs have recently attracted a lot of criticism. Most of the complaints have come from religious groups.

You see, in creating their unique nativity scene, Greggs chose to replace  the baby Jesus with a sausage roll - as you can see in the picture above. It's sacrilegious! It's a disgrace! One complainant pointed out that Jesus was a Jew so the connection with pig products seems particularly insensitive.