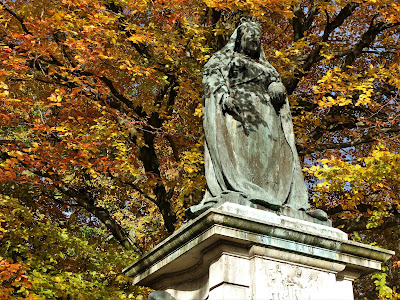 Around Britain and the British Commonwealth of nations, there are many statues of Queen Victoria. This one stands in our local park. It was commissioned by Sheffield City Council soon after her death in 1901 and was unveiled with much pomp and ceremony outside the town hall in 1905. However, it was only there for twenty five years.  Victoria was shifted to Endcliffe Park in 1930.

And ever since she has stood near the park entrance in all weathers and all seasons. She sees the early morning joggers, later young mothers with pushchairs and dog walkers too. Later still she watches the lunchtime sandwich eaters and when night comes she sees young lovers and cider drinkers, teenagers on bicycles and the traffic still circling Hunter's Bar roundabout.

She watches it all. She was The Empress of India and Queen of England for sixty four years. It was a reign that saw incredible change and massive historical steps towards the world we know today. She saw it all and her name is synonymous with that energetic age of industry, commerce, exploration and culture.

She was small of stature - just under five feet tall - but gave birth to nine children, including her successor - King Edward VII. She died at Osborne House on the Isle of Wight, leaving several rather odd requests for her funeral arrangements. She asked that a plaster-cast of her late husband's hand should be placed in the coffin beside her as well as one of his dressing gowns and she also asked for a lock of John Brown's hair and his mother's wedding ring too. Brown was a member of her Scottish staff with whom she enjoyed a special bond over many years.

And now the autumn leaves frame Victoria in Endcliffe Park. Soon another winter will arrive. I hope she is wearing her thermal underwear. 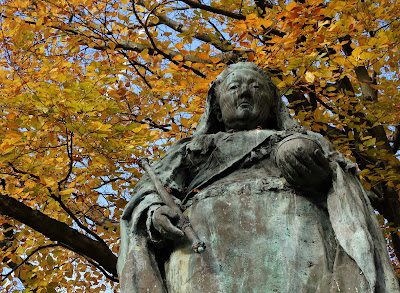