At Christmas, The Beloved Daughter gave me a chocolate bar she had bought in New York in the autumn. It was a Donald Trump chocolate bar. Politely, I thanked her for the gift and then put it in a drawer. Secretly, I imagined that the chocolate within would be like the esteemed president himself - bitter, sickly and liable to cause indigestion or vomiting. 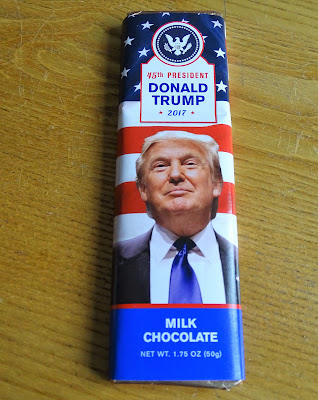 Returning to the drawer a  month after Christmas, I pulled the chocolate bar out and mustered sufficient courage to unwrap it. And there in front of me was my chocolately miniature  Donald J.Trump looking as brown as Bill Cosby or Joe Frazier.

It was time to bite Trump's head off. As I masticated Trump's head I was surprised to discover that its taste was not unlike Cadbury's Dairy Milk which has been England's favourite chocolate for a hundred years. I ate almost half of Trump's body but baulked when I saw that his nether regions were next. No there's no way I will be tucking into that section!

Online I have searched for Theresa May chocolate bars. I mean, if American can produce Donald Trump chocolate products then surely we can do the same for our esteemed prime minister but all I could find was Theresa May silverskin pickled onions and Theresa May bitter lemon throat lozenges. Needless to say, they have not been selling well.
- January 31, 2018