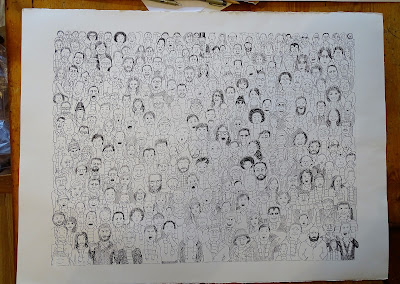 Yesterday afternoon I finished drawing my football crowd. It has taken a long while. I found that I was only able to work on it when I was in the mood, when there was nothing else to do and when I was on my own. Getting these three stars to align was not always easy.

Usually, I have put a CD on the stereo and listened to it while creating a few more faces. For the past few sessions I have listened repeatedly to Ed Sheeran's latest album - "Divide". There's no doubt that musically he is a very gifted young man but some of the lyrics seem quite juvenile to me, emphasising the fact that he is only twenty four years old. When you have known and loved the songwriting of Jackson Browne, Leonard Cohen, Robin Williamson, Joni Mitchell and Bob Dylan - other writers' lyrics can often seem inferior. 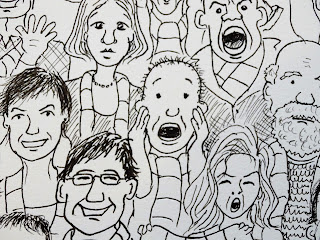 Now that the basic drawing is done, I need to start adding colour. Every character is wearing a football scarf and originally it was my intention simply to colour every scarf  in black and amber - the colours of Hull City.

As the crowd increased in size, I began to wonder whether or not I should colour in the entire scene - different flesh and hair colours as well as clothing. A big task involving many hours of patient work. However, when I finished the drawing yesterday afternoon, I looked at it and thought that maybe I should return to the original vision - scarves only.

I am now in a state of hesitation. And here I am to the rear of the crowd - watching the game and wondering how to proceed with the picture... 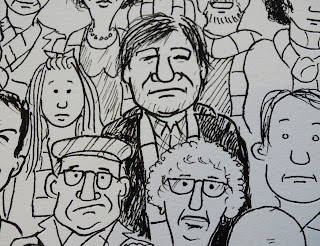