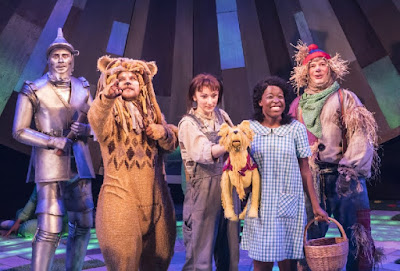 To tell you the truth, if I had been left to my own devices, I probably wouldn't have bothered going to see "The Wizard of Oz" at The Crucible Theatre last night. However, I had my ticket bought for me by some friends from the local pub. We also shared a taxi there and back and ordered interval drinks. This was all paid for through last year's pub quiz winnings.

The show was as enthralling as it was stunning. Everything knitted together so well - from the live music to the stagecraft to the vibrant dancing of the chorus. It was a bouillabaisse of frolicking fantasy with excellent performances from all of the lead players as they took us on a journey to L.Frank Baum's famous 1900 wonderland that would later became the iconic 1939 musical film that starred Judy Garland as Dorothy.

Regarding the current Crucible production I agree with Clare Brennan who said in her "Guardian" review - "The heart of the show is Gabrielle Brooks as Dorothy, expressing the perfect combination of innocence and wonder to carry us off into the shared dream of Oz".

There's something vaguely perplexing about "The Wizard of Oz" story. I couldn't help wondering what it all really meant. Who do these figures represent? It all feels so allegorical and indeed many commentators have proposed various theories about what L.Frank Baum was really up to when he wrote it.

It certainly contains autobiographical, spiritual and political elements though Baum himself may not have been fully conscious of these forces as the tale emerged from his typewriter. He once said that the story was simply a burst of inspiration that came out of nowhere, inspired by looking at the second drawer of his filing cabinet which read “O–Z.”

Bravo to everybody involved in the Crucible production. Superb... and haunting too!