Continuing with memories of our California trip back in 2005... 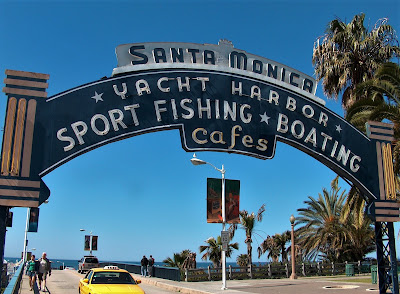 I tailored the holiday myself, having done plenty of internet research, booked all the hotels and, for example, even paid in advance for our tickets to the infamous Alcatraz Island in San Francisco Bay and seats in the Staples Arena to see the L.A. Lakers play . The planned itinerary was  like a picture book that simply needed to be coloured in.

After the long flight from England we arrived in Santa Monica, home to one of my musical heroes - Jackson Browne. But we weren't staying in Jackson's mansion - we were in a family room at the humble Travelodge overlooking Santa Monica Pier.

We booked in around midday and then took a sunny stroll along that famous  Pacific Ocean  pier which is at the western end of Route 66. Later, our slightly jet-lagged ambling brought us to Santa Monica's downtown area and its upmarket pedestrianised shopping zone on 3rd Street. Ian and Frances were keen to explore the Abercrombie and Fitch store where they each purchased some branded items and emerged grinning like two cats that had got the cream. 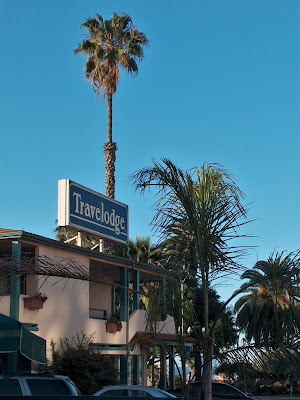 We enjoyed an all-American hamburger meal in an independent cafe and wandered back in the direction of our hotel. This was one of California's prime shopping locations - visited by the rich and famous but it wasn't them I was starting to notice - it was the homeless, the down-and-outs, the hobos.

They were mostly accompanied by supermarket shopping trolleys piled high with all their worldly possessions and not all of these people were men. There were a couple of women too. Later on, I would speak with one of them but I can't remember his name. He was a grizzled veteran of the Vietnam war, haunted by memories of that awful conflict. He had lost his job, then his wife and kids and finally his home. I gave him a ten dollar note, not caring a whit how he might spend it. How can it be that in such a wealthy, resource-rich country homeless people like him can move in the shadows, overlooked, blamed and often despised?

The next day we drove along the coast to Malibu where I saw Bob Dylan's house. Later, we visited Hollywood, cruised around Beverly Hills and strode from Grauman's Chinese Theatre along the Walk of Fame, observing various stars embedded in the pavement. (Perhaps they should embed Harvey Wenstein there too!) It was that evening when we went to see the L.A.Lakers which is something that Ian had specially requested. He got to see the famous Coby Bryant slam dunk a few basketballs and acquired the autographs of every one of  The Laker Girls cheerleading team.

Afterwards, we had a good value meal in the nearby International House of Pancakes (IHOP) before heading back along Santa Monica Boulevard to our hotel.
It had been a great day and the next day we got to see Rodeo Drive with its ludicrously expensive and exclusive shops before visiting the wonderful Getty Art Museum which overlooks Route 405 in the north western suburbs of L.A.. The palatial buildings themselves are a magnificent sight to see - anchored to a lofty hilltop and inside there was a treasure house of  magnificent paintings including for example Canaletto's  "The Grand Canal in Venice from Palazzo Flangini" and Claude Monet's "Marine Sunrise".

I asked a barrel-chested black security guard if I could take photos inside the galleries and he said, "Sure! Go ahead - no problem! Take as many as you want!" What a contrast with the majority of  European art galleries in which photography is invariably strictly forbidden!

We drove back to Santa Monica for the final time, looking forward to the next day when we would be driving across the desert to Las Vegas but as I drifted towards the valley of sleep I heard something outside our ground floor room. I edged back the curtains and saw a homeless man with his shopping trolley. He was settling down for the night in the bushes  right under our window in the land of the free.
- January 11, 2018