Continuing the story of our 2005 family holiday in America...
With many miles to go, we headed out of Las Vegas straight after breakfast.

Instead of driving all the way back to L.A. , we took Highway 58 near Barstow. It cuts across the desert landscape to Bakersfield. On the way over, we stopped at Boron, a dusty godforsaken small town in the middle of nowhere. It is named after the mineral boron or borax which is still extensively mined in that area. I blogged effusively about Boron before. Go here.

After a hearty lunch in The Corral Diner, we carried on to Bakersfield where I filled up with petrol (American: gas) and then we motored northwards along The Central Valley. I thought of the Joad family in "The Grapes of Wrath" and their onerous journey from Oklahoma. The Central Valley was to be their salvation - their Canaan - but all they found was more hardship.

When I was twelve, our geography teacher set us a homework task - to draw a detailed map of California but that weekend I did something else. Instead of drawing a map in my book I made a huge  papier-mâché  model of The Golden State  and painted the mountains and deserts, before labelling the major cities. In the middle was the green swathe of  The Central Valley which I imagined to be a land of plenty with rich soils spawning all manner of vegetables and apple orchards and orange groves.

My relief map was almost as tall as me and I struggled to transport it on the school bus. In my mind's eye I can still see the face of my geography teacher when I presented that crazy labour of love and geographical enthusiasm. His jaw dropped visibly and he didn't know what to say.

And now I was riding along through the same valley all the way to Visalia where we took a right and headed east towards the southern Sierra Nevada Mountains. I had booked a hotel at Three Rivers, planning to drive into The Sequoia National Park the following morning.

The road up to the sequoia forest had only opened up the previous week after the annual winter snowdrifts. We saw a deer edging nervously from the trees and noticed that the snowy sides of the mountain road were banked up. A week before the park had been closed.

Finally, we arrived in the land of the giant trees and the greatest of them all was The General Sherman Tree - the biggest living organism on the planet. The ground circumference of the trunk is 102 feet and it is calculated that the entire mass of the tree  would weigh over 2000 tons . Furthermore, it is believed that the tree is about 2500 years old. It really is an awesome sight and I use that word deliberately. Awesome! 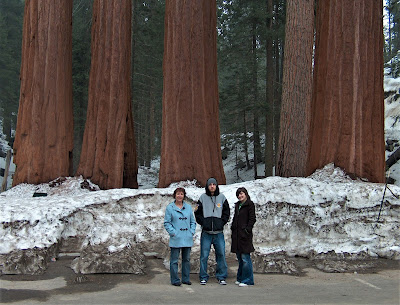 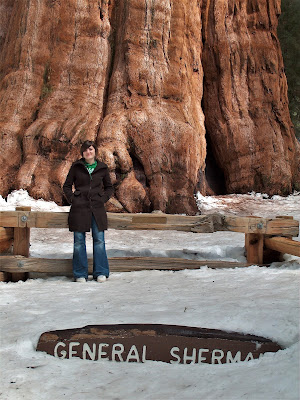 A couple of hours later we descended from the Sierra Nevada Mountains and headed for Fresno on our way to San Francisco where of course people wear flowers in their hair.
- January 17, 2018