On Monday I visited "The Country of my Heart". Not the country of my own heart but the home territory of the Nottinghamshire writer David Herbert Lawrence or D.H.Lawrence as he is better known. He was born in a small coal mining town called Eastwood in 1885 and died in Vence, France in 1930, a long way from "The Country of My Heart". These days it is administered by  Broxtowe Borough Council to the west of the city of Nottingham.

This landscape, close to Eastwood, was the playground of Lawrence's youth and it coloured many of his early writings including "The Rainbow", "Sons and Lovers", "Women in Love", "Lady Chatterley's Lover" and the early short stories. Often he changed place names but the places themselves are often only thinly disguised.

I was in the area for another long circular walk. Clint had his handbrake yanked near the ruins of Beauvale Priory. "Ouch!" he protested but he was happy to spend a few hours dozing in January sunshine as his master plodded along a pre-planned route, determined not to get lost nor to plunge suddenly into a badgers' sett!
Four hours later, the circle was complete. I had seen many things - including the M1 motorway, the villages of Watnall, Greasley and Moorgreen, a sugar beet field, snowdrops in St Mary's churchyard, two unkempt ponies, a running hare, streams and woods and a memorial bench..."Forever In Our Hearts".

Where Felley Mill once stood just north of Moorgreen Reservoir, I stopped to talk to a local man. He was aboard his silent mobility scooter with a front basket that held binoculars, dog treats, snacks and a bottle of "Lucozade". He was accompanied by two faithful Jack Russells. The rotund fellow had known the area since childhood and loved to see the comings and goings of birds and seasons. It was the "country" of his "heart" too but unlike D.H.Lawrence, he had never left it. 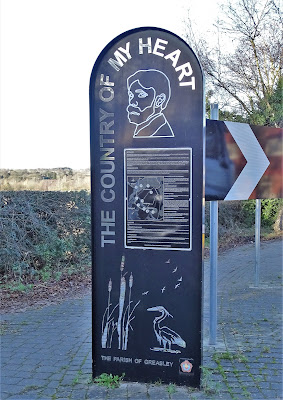