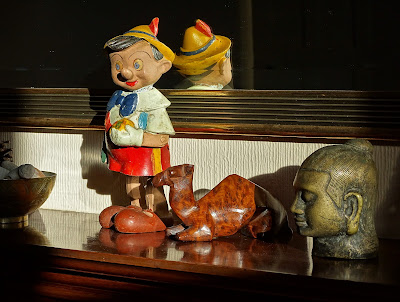 Yesterday morning, as I vegged out on the sofa with this laptop on my lap, I looked up to see that sunlight was illuminating the mantelpiece. In a small way, I thought that it was quite beautiful.

I took up my camera to capture the domestic tableau. There's Pinocchio in the centre. He once resided in my mother's glass display cabinet. She kept many interesting things in there. I have known that particular Pinocchio all my life.  Mum probably bought him a couple of years before I was born. He was most likely a bargain buy.

He is a clockwork figure and I can recall him being wound up and walking along table tops with his head nodding. He is associated with the animated Disney film of 1940. Unfortunately, he cannot walk now - like most old people he is rusted up inside


In the late 1940's similar clockwork Pinocchio figures were manufactured but as far as I can determine they were simpler and cruder than our Pinocchio who was most probably produced by Les Jouets Creations (Paris) in 1950. I have seen an identical figure on e-bay with an asking price of £300.

Of course Pinocchio had a big problem with his nose. Whenever he lied, it would grow a little bit longer.  Given her Brexit skulduggery, if Britain's  current prime minister had a similar personal problem she might now have an entire flock of birds roosting on her olfactory appendage. 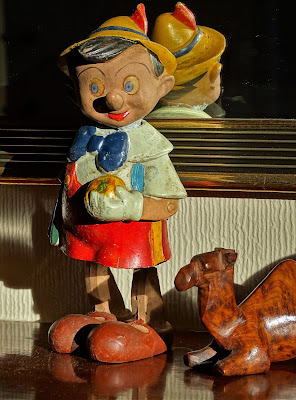