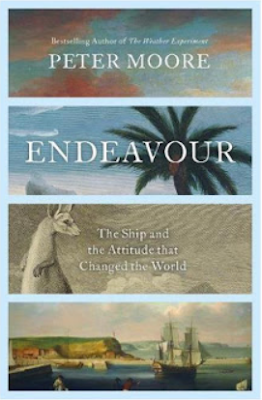 Yesterday afternoon I finished reading "Endeavour" by Peter Moore. It is a lovingly researched tome that plots the history of a very special ship that was built in Whitby, Yorkshire in 1764

Its first name was "The Earl of Pembroke" and its initial purpose was to transport coal from The River Tyne down to London. It also was involved in trading voyages to The Baltic Sea and probably to northern Germany too.

Made from Yorkshire oak, it was a capacious and buoyant vessel, easy to navigate and it quickly gained favourable reports from experienced mariners.

In 1768, the British Navy in association with The Royal Society were on the look out for a suitable ship to undertake long distance missions to the little known South Pacific. One of those tasks was to observe the transit of Venus from the island of Tahiti.

"The Earl of Pembroke" was requisitioned and fitted out for the voyage. In the process the ship gained a new name - "The Endeavour" and a new skipper who had co-incidentally first begun his education as a seaman in Whitby. He was James Cook of The Royal Navy.

When the ship returned to England, three years had passed by but the mission had been stupendously successful. The transit of Venus had been observed successfully and  Cook had made amazingly accurate maps of  New Zealand and the east coast of Australia. On board was the botanist Joseph Banks who had gathered many specimens of previously unknown plants.

Later "Endeavour" made voyages to The Falkland Islands where Britain was establishing a colony. Later still she was renamed "The Lord Sandwich" and was involved in carrying mercenary German or "Hessian" troops to the American colonies as Britain sought to suppress rebellions that preceded the consolidation of American independence in 1776.

She was eventually scuttled near Newport, Rhode Island in an attempt to block one of the sea channels there. News had already arrived that a French fleet was on its way across the Atlantic to support the American rebels.

Peter Moore's excellent book is more than just a book about a ship. He sees the years of "Endeavour" as a time of enlightenment as the people of the world became more bonded together than ever. Humanity was making great strides in science, invention and international trade. We were striving towards the modern world we know today and "The Endeavour" was arguably the flagship of that movement.