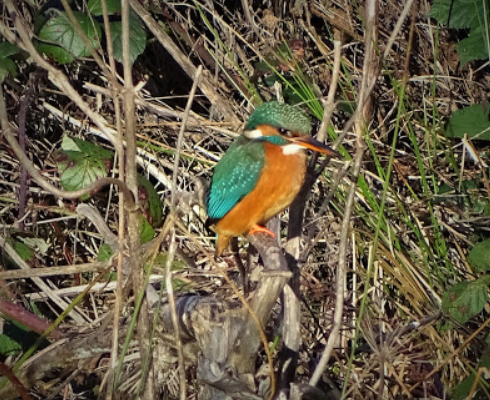 Apparently, there are one hundred and fourteen types of kingfisher in the world. In England we have only one - the common kingfisher. They are small, speedy birds and notoriously difficult to photograph.

On Sunday, Shirley and I promenaded along the valley of The River Porter. Near Shepherd's Wheel there is a millpond that once powered the old water wheel. Tangled vegetation descends to the water's edge.

It was in this very pond that I snapped a grey heron back in April 2016 - go here.

Well on Sunday, Shirley spotted a flash of blue and orange in the sunshine on the opposite side of the pond. I took out my trusty bridge camera, resting my elbows on a metal pole and using the fullest zoom facility possible I managed to capture a few images of the kingfisher as he or she observed the pond before him/her.

You might say "Aw! What a cute bird!" but he was waiting there to kill. On a smaller scale, the creature's eyes and spear-like beak are as deadly as the grey heron's. Evolution has provided the kingfisher with characteristics that will assist the daily quest for survival.

These are not the best kingfisher pictures ever taken but given my relatively inexpensive Sony camera, I am happy enough with them. After all, I was probably twenty yards away from the bird. 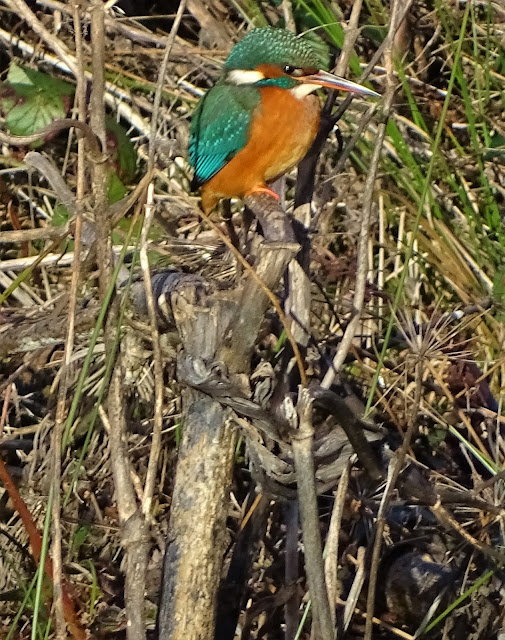