Last night I went to see a production of "Kiss Me, Kate" at The Crucible Theatre in Sheffield's city centre. I travelled in a taxi with four other regulars from our local pub. Another one couldn't make it because he was ill.

I hadn't seen a production of this fairly famous musical before. It was first performed at the Shubert Theatre in Philadelphia in December 1948. It was written by Samuel and Bella Spewack with original songs by the legendary Cole Porter.

The Sheffield production was excellent with faultless renditions of the songs, vibrant dance routines and imaginative stagecraft. It all blended together superbly and there was a twenty strong orchestra palely illuminated on a raised area at the back of the thrust stage.

Though there weren't any badger holes, sometimes I "got lost" in the entertainment - forgetting myself, absorbed by the theatrical chicanery in front of me. But in spite of the excellence of the production there were other phases when my mind wandered away. I guess that the silliness of the core story wasn't truly my cup of tea.

You can find out about the plot - that core story -  elsewhere if you really want to. Essentially there is a play within a play. The inner play is Shakespeare's "The Taming of the Shrew" but the audience's main focus is upon the backstage dynamics as the ups and downs of relationships between lead actors are revealed. It all ends happily when the shrew - Lily Vanessi/Katharine submits to the romantic overtures of  Fred Graham/ Petruchio as the tensions of backstage and the Shakespearean production are healed with a final dramatic kiss.

We travelled back to the suburbs in another taxi - arriving at our pub at 10.30pm. But the doors were locked. The pub is meant to stop serving at 11.15pm so we had been looking forward to a couple of pints to round off the evening. Reluctantly, the young Irish barman let us in and equally reluctantly he deigned to pour us one pint each but no more.

Bizarrely, I believe he thought he was doing us a favour when it is of course our money that pays his wages. This isn't the first time he has unilaterally decided to shut up shop on a quiet evening. The ignorant manager/landlord isn't the kind of bloke it's worth complaining to. He just doesn't seem to care either. As "Kiss Me, Kate" proved - it really can be a mad world. 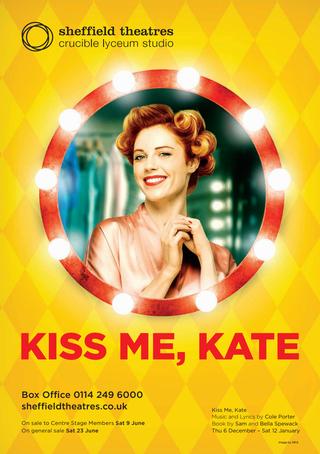