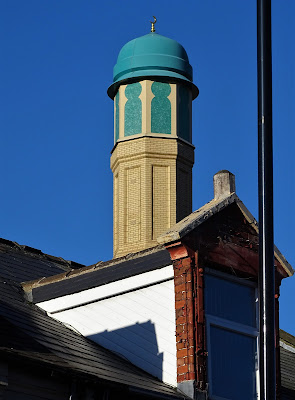 What's that rising above the rooftops in the Lowfield district of central Sheffield? And then another one popped up as I walked along nearby Staveley Road. Are they blunt-nosed space rockets? Perhaps they are giant pepper pots. 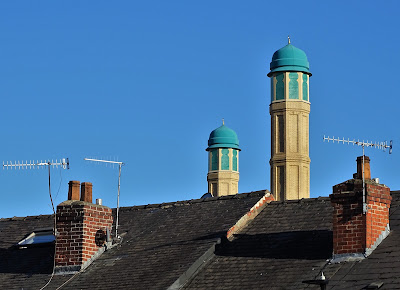 No my friends - it's the Madina Masjid Mosque. It was completed in 2006 at a reputed cost of £5 million. This money was raised by the local Muslim community and there is apparently no truth in the rumour that they received generous donations from Saudi Arabian benefactors. 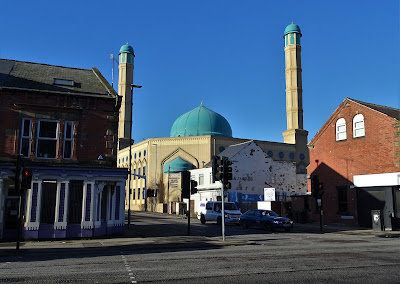 I blogged about it previously in October 2013 when I even got to go inside.


Mosques rising above English  rooftops. It has become a familiar scene in many large northern towns and cities - from Rochdale to Rotherham and from Bradford to Blackburn.

By the way, a mosque does not have to look like that. Islamic teachings say nothing of significance about mosque design. The Madina Masjid Mosque looks as if it has been flown over from Riyadh or Jeddah and lowered into position.

I have never seen any women entering the mosque - only men, Why should that be? After all, in our dwindling Church of England congregations women are frequently predominant. They stand and sing side by side with men - as equals.
- January 18, 2019