Friday was deceptive. I picked up Pierre - my Citroen hire car from Carcassonne Airport and tootled westwards to Mirepoix and Les Pujols in gorgeous February sunshine. The land was green and I saw a gang of vineyard workers tending leafless vines ahead of springtime with confident expectation of another profitable crop.

Sometimes in the French countryside you drive through avenues of lime trees that rise like Grecian pillars from the verges. I would have stopped to take pictures of one or two of them but there was never an easy place to pull in.

It was so warm that I wound down the side window as I had not taken time to work out the car's air-conditioning before setting off. To the left, rising in the distance, I could see the Pyrenees dusted by recent snows.

At Les Pujols I turned left on the quiet lane that leads to Coussa. Puddles in the fields spoke of recent rain but as I say in that ethereal light, Friday was deceptive - as if summertime was just round the corner with its sunflowers bending their heads and maize fields nine feet high in sultry air all shimmery with August heat.

At Robin and Susi's remote property I again looked to The Pyrenees. This is the view from the front of their place at Floc... 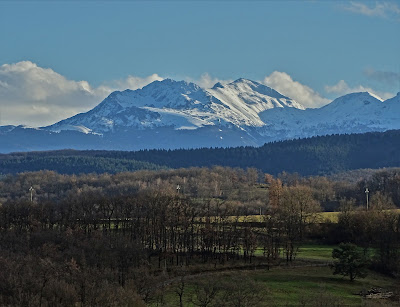 Robin was chopping logs round the back and before I ventured there Susi taught me some of the domestic ropes. How to start the log fire. How to turn on the washing machine. How to change the cat litter. How to lock up. How to keep warm. How to travel to one or two of their favourite eateries. How to remember the names of the nine cats. My head was swimming.

Then I went to see Robin wielding his big chopper. He'll be sixty eight on Tuesday. Nobody in the world has known me as long as he has. We are the same but different. I love football and he loves Formula One, motorbikes and skiing. I dislike racing cars and motorbikes and I have no desire to ever go skiing. He has a conservative outlook but I lean towards socialism and fairness. I am a man of words and images while he is a man of axes and engineering. Still, we get along - we always have done. We are brothers with much in common. So many memories. So many years.
Saturday was cold. Robin and Susi left just after seven - heading to Toulouse Airport and then on to Fez in Morocco. By midday the snow was horizontal and threatening to settle. It wasn't a day for venturing out so I stayed home the entire day and night with my nine "furry companions" - Bounder, Zorro, Daisy, Marko, Polly, Alfie, Treacle, Tinga and Tucker. One or two other cats appeared from nearby farms. Oh mon dieu! I'm residing in a French cathouse!
- February 03, 2019