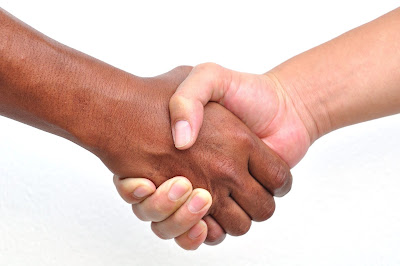 How should we shake hands?

Handshaking is important in British culture and indeed in many other cultures too. It's customarily how we meet or greet people. It can also be how we say goodbye. There's physical contact - not just smiles or words of greeting or farewell - but actual touch.

One's handshake  transmits information to the other party. A limp, seemingly reluctant handshake suggests disinterest or superiority. In contrast, an excessively strong handshake suggests that there's a power game going on. The provider of the "too firm" handshake may be deliberately attempting to claim some kind of illusory top dog spot.

Perhaps it's mostly characteristic of would-be alpha males but I can recall several manly handshakes which have almost caused me to yelp with sudden pain as my knuckles have been unexpectedly crushed. That's not how a genuine handshake should be. You surely should not cause the unsuspecting recipient any discomfort.

This is my philosophy of handshaking: it's a way of signifying respect for the other person and establishing equality. There should be no squeezing or limpness and you should avoid holding on -  never maintaining your grip for too long.

A socio-psychologist could have a real field day observing and reflecting upon the handshakes that are meted out by the forty fifth president of the USA. Now there's someone who definitely uses his handshake as a means of  suppression or intimidation. He often squeezes too hard and deliberately hangs on for too long. These are techniques that he probably developed while working in real estate and property development. With him it's all about power.

I never thought I would find myself agreeing with anything said by the late George H.W.Bush, but with regard to handshaking, we are definitely on the same wavelength. He said:-

It is possible to tell things by a handshake. I like the "looking in the eye" syndrome.
It conveys interest. I like the firm, though not bone crushing shake. The bone
crusher is trying too hard to "macho it." The clammy or diffident handshake -
fairly or unfairly - get me off to a bad start with a person.
- February 17, 2019