This time last year I was eagerly anticipating the publication of the first "BOSH!" cookbook. The book was launched with much brouhaha at Borough Market in London on April 19th. I blogged about the event here.

In the months that have passed by since that happy launch day, the book has become a tremendous success. Sales have far exceeded expectations and "Bosh!" has become Britain's best-selling vegan cookbook of all time.

Our son Ian and his "Bosh!" partner Henry have appeared on several TV and radio shows and have featured in various newspapers and magazines. It has been a helluva ride for them.

Their publisher - Harper Collins - wanted to see a second "Bosh!" book on the market before a year had passed so Ian and Henry knuckled down and came up with a whole new cookbook which they have named "Bish Bash Bosh". It will be published on April 4th and this is the front cover:- 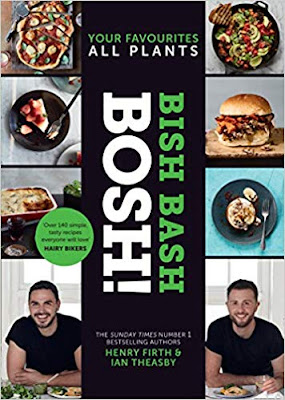 Last week they spent two days signing inner pages ahead of the binding process. They had 13,000 books to sign! A sweet kind of punishment. The "Bosh!" phenomenon continues. Let's hope that "Bish Bash Bosh" mirrors the success of the first book.

If you are interested, you can pre-order a copy of "Bish Bash Bosh" from Amazon UK. Go here. Non-UK ordering sources are shown on the "Bosh!" website. Go here.
- February 19, 2019