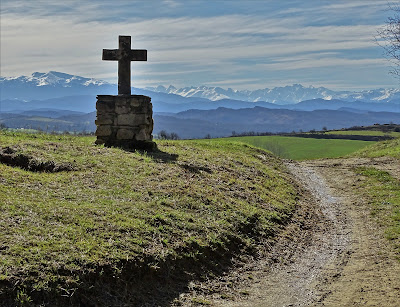 I have just come back inside the house after sitting in the sunshine with my shirt off, finishing "Sons and Lovers". Imagine that if you will - a bare-chested Yorkshire Pudding, soaking up the sunshine on February 9th!

I have thoroughly enjoyed the novel - partly because I have been able to give it my full, uncluttered attention. It speaks of social mores just after the Victorian era, of sexual psychology, of people striving for happiness. Our hero, Paul Morel, remains emotionally crippled and at the end readers are not quite sure what the future might hold for him. Miriam waited for him for years but in spite of himself he spurned her - intellectualising his resistance, unaware that he was thwarted by his mother's controlling influence.

Yesterday, Pierre took me to Mirepoix. It was not a market day so the picturesque little town was sleepy. I didn't care because I had mainly come there to park before undertaking a 10km walk north of the town. It  was explained in French in "L'Ariège à pied" and  I was able to find my way quite happily up into the forest along woodland tracks, passing the "hameau" (hamlet) of Marty and then down to Bourdicou - another remote "hameau" - where I took the photo of the cross at the top of this blogpost.

I sat upon the plinth of that cross for twenty minutes, looking out to the Pyrenees, stripped to the waist munching the apple I had brought with me. A horsey woman walked by, clearly stunned by my masculine physique. "Bon jour!" I said to her in a husky tone and she quickened her pace. She may have thought I was Jesus.

After the walk, I strolled around the centre of Mirepoix. You will be relieved to learn that I was no longer shirtless. Previously, I have visited Mirepoix a few times - but usually on market days when it is thronged with traders and visitors. It was nice to see it in a more quiet, everyday mood. And then I drove back to Floc to light the log fire, make spaghetti sauce and settle down for the night with nine pussies to stroke.