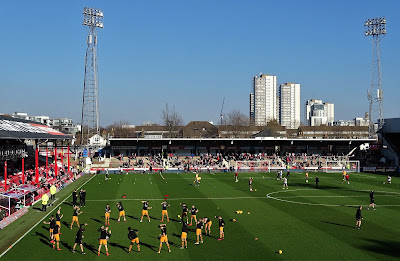 Is anything worse than Brexit? The foul odour of cigarette smoke perhaps?...No. An infestation of cockroaches?...No. The Bubonic Plague?...No. A round of golf with Donald J. Trump?...No. An earthquake? A tsunami? Global warming?...No.No.No. But Hull City getting thumped by Brentford F.C.? Yes, for sure, that is a hell of a lot worse than Brexit.

I was there in the Saturday sunshine. At Griffin Park, Brentford.. When Fraizer Campbell nodded in the first goal all was well in the world but it was a false dawn. We ended up losing by five goals to one and what is more Brentford deserved their victory. As the players trooped off  and as I contemplated suicide, I felt like applauding the Brentford team. They had cut through our defence like a hot knife through butter.

I trudged back to Gunnersbury tube station, remembering that only three hours before I had walked that same route in reverse.

I had consumed my petrol station lunch at a picnic table by The River Thames, reading a couple of chapters of "The Tattooist of Auschwitz". It was so warm. Was this really February? In the last few days, England has recorded the highest February temperatures of all time.
Just across from where I was sitting, out in the river - there was an "ait". In fact it was Brenford Ait. Until Saturday, I had never heard of the term "ait". It means an island in a river. Brentford Ait is a low-lying wooded island and it's close to Lot's Ait.

Along the Thames Path, I met The Birdman of Brentford. He was doing what he claims to do every day of the year - feeding gulls. He threw chunks of bread in the air and the acrobatic creatures swooped to win them from the rest of the gang. It was quite a scene though it all happened so quickly that I had trouble capturing the activity with my trusty camera. 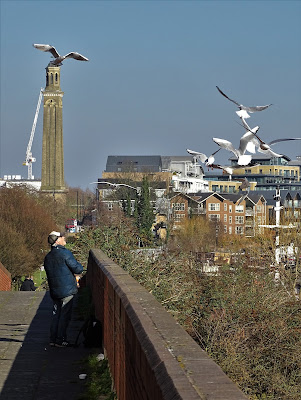 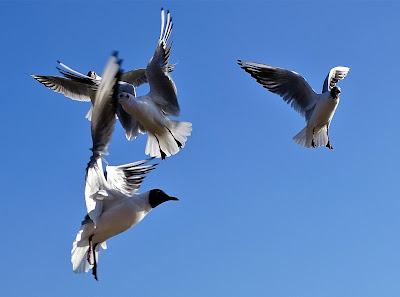 That night we met up with Ian and visited "The Punjab" - an historical Indian restaurant near Covent Garden. We had to queue up before admission was allowed. It was a delightful, authentic meal and of course it was nice to have my family together again. However, a dark cloud hung over the dining experience. Was it Brexit?...No. It was Brentford F.C. 5 Hull City A.F.C. 1.
- February 27, 2019