Monday was such a glorious day. After breakfast, I set off courtesy of Pierre - my silver grey Citroen. It's just a short drive to the small town of Varihles. Leaving there, I was soon on the N20 autoroute heading down to Junctiom 10, north of Foix.

Thence to the D919, heading in a north westerly direction. It was a long, quiet road and I knew exactly where I was heading because I had spotted it on page 90 of Susi's guidebook "L'Ariège à pied" or "The Ariege on foot". This part of the Midi-Pyrenees region is known as L'Ariège.

And soon I was there in the charming hilltop village of Carla-Bayle. My starting point. I strolled around the ancient settlement for a few minutes, noticing its ramparts, its marvellous views of the snowy Pyrenees and how some of its quaint medieval houses have now been acquired by artists. The village even has its own website. Go here.

In the village square there was a fountain dedicated to a seventeeth century philosopher called Pierre Bayle. He was born here and upon his death the village changed its name from Carla-le-Comte to Carla-Bayle. I must admit that I had never heard of him before but in his time he was apparently an influential thinker whose work perhaps foreshadowed The Age of Englightenment in the eighteenth century. 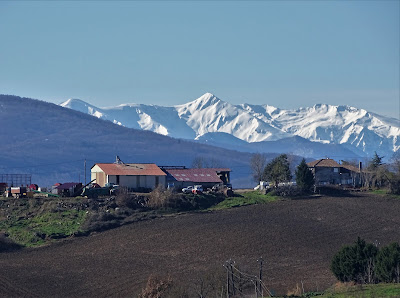 And then I was off, marching down to the nearby lake and then along its northern shore. The route was not very well-marked - occasional yellow stripes on trees. Up to Bellecoste and then down a muddy track into a wooded valley and up again, meeting the lane that leads to Barthe. It's little more than a sprawling farmhouse with outbuildings and baying hunting dogs that were thankfully behind bars.

Down into another valley. Leaping over a stream and then following an overgrown farm track to Montcagnou. The place was abandoned and the farmhouse in ruins. Had there been a cataclysmic fire? Its former inhabitants appeared to be buried there and it seems that they died on the same day in 2006. I wandered around the shell of their home, filled with wonder. 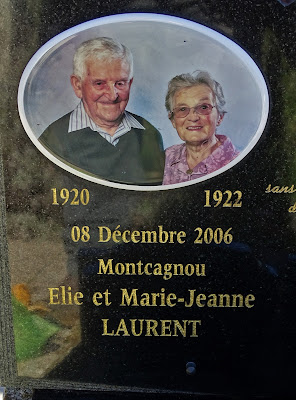 Onwards till I met another track. Treacherous in places with soft mud. Why is French mud so slippery? Fortunately, I didn't fall.

Up ahead, Carla-Bayle was coming into view again. Along the lanes and up the hill to Pierre. In his boot (American: trunk) there was a bottle of water which I glugged like a camel that has just traversed the Sahara.

It was time to head back to Pamiers to buy some things in a "Super U" supermarket.

I spoke very briefly to just four people yesterday. A sun-tanned woman hiking by the lake with a big rucksack. An old man with a flat cap enjoying the sunshine by the roadside at le Badoune. A small, middle aged woman who wanted me to get a pack of  water bottles from a top shelf in "Super U" and the woman on the checkout till. In total twenty three exclusively French words were exchanged - if my arithmetic is correct!

Today is grey and rather miserable but not so cold. The internet is so slow here that photographs take an age to upload onto "Blogger". You can do so many things while waiting. Have breakfast. Clean out the fireplace. Get some more logs from the shed. Stroke the more amenable cats. Take the compost caddy to the big bin by the vegetable patch. Make another coffee. 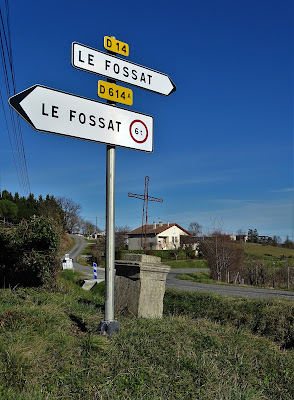