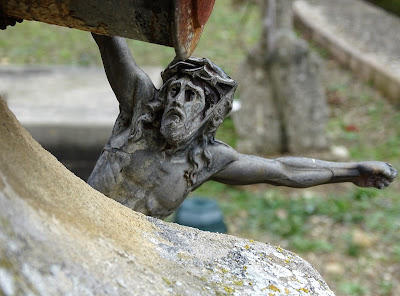 In the village of Coussa's cemetery, I spotted a small Jesus scaling a gravestone. He was dissociated from the iron cross to which he must have once been affixed and looked none too happy about the separation.

Some of the family graves had extra plaques on them. I spotted this one and was surprised that I could translate it immediately. I liked its sentimentality:-
The leaves fall,
the seasons pass by,
only the memory
endures. 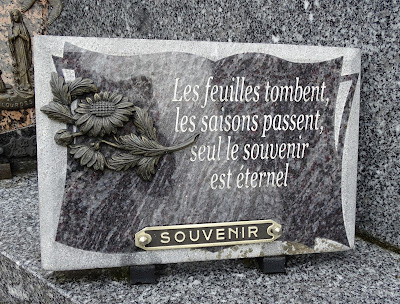 The day had stayed overcast but dry and a little warmer than when I first arrived here. Rather than driving to Mirepoix, I donned my boots and set off from the house along a very quiet country lane.

First of all, it led to a farm called La Monge D'En Bas. I was wary as I approached because of barking dogs. They were running loose and one of them - a healthy black labrador - decided that he would accompany me. He walked with me for about two miles - far from his home - bef'ore running off into some woods. I didn't see him again but I had already caught him on camera. I called him Macron. Here he is:- 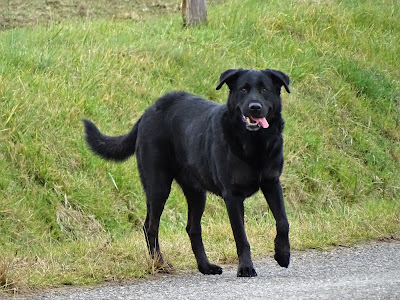 I had an excellent, detailed map in my pocket but some of the tracks and paths indicated did not appeat to exist so I stuck to the paved lanes and travelled in a big circle.

It's a mile from Coussa to Robin and Susi's former farmhouse and when I got back to the property it wasn't long before clouds surrendered to sunshine and blue sky. That's sod's law I guess. Here's their place with Pierre Le Citroen snoozing in front:- 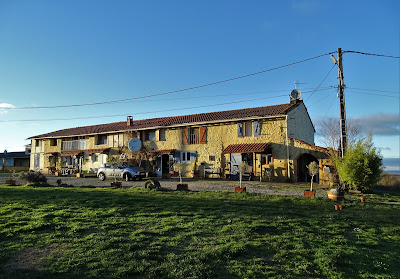