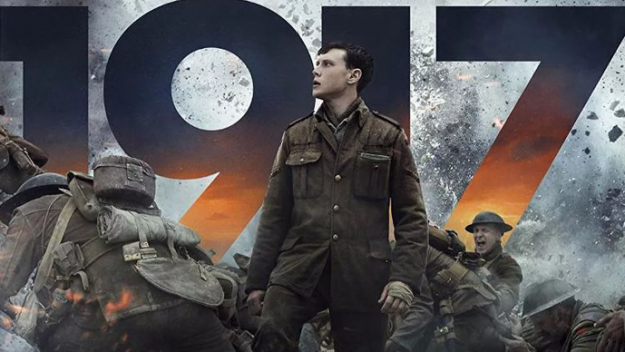 For a change, I went to Sheffield's newest cinema yesterday morning. It's called "The Light". I was there to see the new Sam Mendes film - "1917".

In the promotional image shown above you can see Lance Corporal Will Schofield played by George MacKay. He is the hero of "1917". He has a vital message to take from one part of the western front to a different location some nine miles away.

And what a journey it is! A journey through  mazy trenches and over a nightmarish wasteland where flies and crows feed on the corpses of dead horses as bloated human bodies float in flooded bomb craters.

The spectacle is very convincing and often breathtaking - made more so by the illusion that we are following Schofield's mission in one long, continuous shot. The attention to detail is phenomenal. You are transported right back to that terrible war and Thomas Newman's occasional music works superbly to enhance the unfolding drama.

If you will pardon the expression, I always want to be blown away by the films I choose to watch. I want to have no reservations, to emerge from the cinema  with five stars in my eyes. However, that feeling of complete satisfaction is very rare and regarding "1917" I have a couple of small criticisms.

Firstly I would ask how, where and how often did soldiers in the trenches shave their faces? Schofield and his companion Lance Corporal Thomas Blake are as clean-shaven as every other soldier we encounter. It is as if they had all been to their local Turkish barber that very morning and what is more when Schofield smiled he had pearly white Hollywood teeth. That's surely not how teeth were in 1917.

Secondly, there's a dramatic scene in which Schofield flees his German pursuers by leaping into a fast flowing river. There are rapids and uprooted trees and he barely manages to survive the scary aquatic ride. However, there are no such rivers in the flat lands where trench warfare happened. There the rivers are wide and sluggish as they make their lazy way to the sea. It was as if he was in a mountain river.

I'm sorry. I shouldn't carp. Instead I should emphasise the big picture by confirming that "1917" is genuinely awesome. It was developed organically over several months and is a wonderful example of what team work can do when everybody is pulling in the same direction towards an ambitious goal. It is a magnificent cinematic memorial to a  tragic and ultimately pointless war in which 22 million died and millions more suffered injuries that plagued them for the rest of their lives.
- January 15, 2020