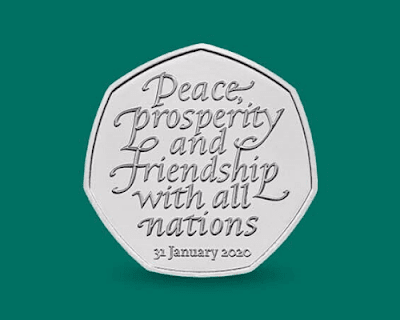 Britain's Royal Mint will be issuing a number of  limited edition fifty pence coins this Friday. They are  to commemorate our country's departure from The European Union - in other words to mark Brexit.

Above you can see the wording that will appear on the reverse of the coin - "Peace, prosperity and Friendship with all nations". I wonder who dreamt this wording up. Perhaps Boris Johnson's chief political adviser - Dominic Cummings who with the assistance of mainstream media cunningly engineered the tragic Conservative victory in the December general election.

Examining those words more closely I have several things to say. Firstly, half of British voters did not want to leave The European Union. Secondly, what does "leaving" mean anyway and can we ever entirely leave as we are so closely connected with our European neighbours? Thirdly, how will these coins be judged five, ten, twenty years from now? Perhaps they will strike a cruelly ironic postscript note.

Let us look at the words. In what sense does leaving a union of nations indicate "friendship"? Surely it suggests the opposite and where there is division it is historically not the best climate for either "peace" or "prosperity". These words are pretentious nonsense - trying to pull the wool over people's eyes.

"Division, regret and desperate bickering for trading advantages with all nations" would seem to me to be a more honest legend to write on the reverse of the 50p coin or perhaps simply: "Into the abyss with Mad Johnson at the helm".

In my way of thinking, January 31st 2020 will be a very sad day for Great Britain. The most appropriate way of marking it would be the tolling of bells all across the nation - solemn funeral bells. And why has "Friendship" got a capital "f" when "prosperity" hasn't? Simply stupid.
- January 29, 2020