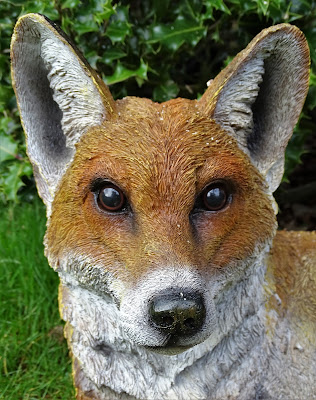 Let me introduce you to Fake Fred Fox. He came into our lives on Christmas morning and now he sits in our garden beneath the tree where much of the bird feeding happens. Fake Fred was of course modelled on the real Fred Fox who was a regular visitor in past years. See here and here.

Fake Fred is more predictable than Real Fred. Fake Fred doesn't move unless I pick him up. Real Fred would have never allowed that to happen. He was a wild animal. Fake Fred was moulded from resinous plastic in a factory but Real Fred came out of the belly of a vixen in a secret urban den burrowed beneath an abandoned garden shed. 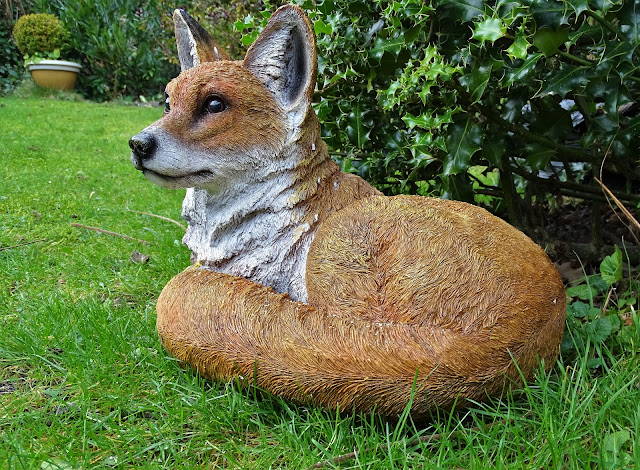 There are other differences too. Fake Fred never eats a thing but finding food was the number one purpose of Real Fred's life. We bought him several tins of dog food and he also chomped on lamb bones and chicken carcasses.

And Fake Fred is completely silent. But a few years ago I would sometimes hear Real Fred screaming at the moon in the back gardens behind our house. Once you have heard the yowling of a real fox you never forget it. The noise will often accompany mating rituals. Thank heavens human beings don't need to carry on that way. 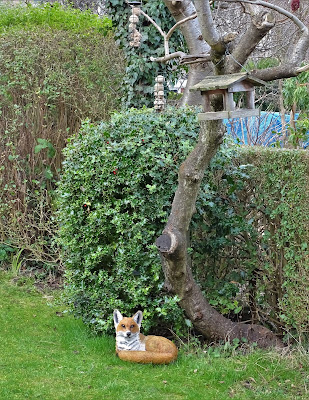 Above - there's Fake Fred Fox under the bird feeding tree. He scares off cats and also acts as a perch for a cheeky robin that appears from time to time. Below you can see some of our daffodils emerging from the ground in early January. This is far too premature and like the butterfly I saw on December 30th quite starling too. You can see Fake Fred in the background. He hasn't moved an inch. 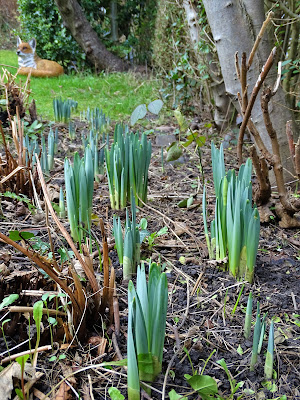