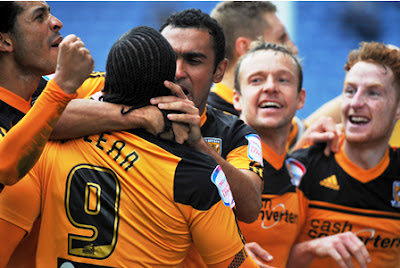 Hillsborough - yesterday afternoon. Hull City substitute, Aaron Mclean is mobbed by his team-mates after forcing home the winning goal in front of the famous Leppings Lane away stand. Famous? Yes - for this is where - in April 1989 - ninety six Liverpool fans were crushed to death ahead of their team's FA Cup semi-final against Nottingham Forest. Those who died were not responsible for their deaths. Others were to blame including South Yorkshire police and the local authority and the Football Association but they were not the ones pushing and squeezing into the middle pen from the back of the stand just before kick off.

After Mclean's goal there were scenes of jubilation at the Hull City end and soon we were singing across to the Sheffield Wednesday "tribe", "We can see you sneaking out!" and "Is there a fire drill?" as frustrated Owls supporters haemorrhaged from the stadium.

Afterwards, as we made our way back up the hill to Vainor Road where Tony's car was parked, we passed lines of redundant police officers in hi-visibilty jerkins. One of them had a video camera on a tripod filming the emerging Hull City supporters. They weren't offering helpful directions or chatting cheerfully to supporters like bobbies of yore. Their aggressive expressions were reminiscent of Nazi strormtroopers. Above us, the police helicopter whirred, adding to the intimidating atmosphere as a giant grey police horse defecated on Leppings Lane.

On Vainor Road, we passed the semi-detached house that Shirley and I almost bought in 1989. We pulled out of the deal when the survey revealed that the vendors had not had building regulations approval for a loft conversion. I considered how different the pattern of our lives would have been if we had moved there. Different schools for the kids, different friends, different footsteps on different pavements. A different local pub. It's funny how random choices, random moments can utterly change the character of one's life.

We deserved to beat Wednesday yesterday afternoon. Then  we went to "The Cremorne" on London Road before a delightful Turkish meal in the Turquaz restaurant - made all the better because we were joined by our beautiful son Ian - up from London for the first time in two months. It was great to see him and our friends - Tony and Fiona were great company as usual. I also very much enjoyed the sight of a grinning belly dancer undulating sexily amongst the tables. Later we were in "The Greystones" before walking back to "The Banner" for more traditional English ales. It's weird how such nights are all the nicer when your team has earned a victory. Up The Tigers!