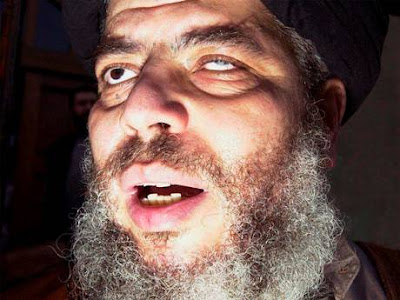 Leaving on a Jet Plane (Song for Abu Hamza)

So please smile for the T.V.
To America you soon shall flee
Seatbelt on it's nearly time to go
Cause you're leavin' on a jet plane
You'll never see these shores again
Oh Abu, you really gotta to go!

There's so many times you've been in court
But all those tricks have come to nought
I tell you now, you don't mean a thing
Every bitter word, I'll think of you
Every IED, I'll wish on you
If you come back, you'll get a good kick-ing

So sod off and go away
Don't come back another day
Hold on like you're on a fairground ride
Cause you're leavin' on a jet plane
You won't come back here again
Oh Abu, there's no place left to hide...

Abu Hamza al-Masri - born in Egypt in 1958. Entered Britain in 1979 on a student visa. Estimated cost to the British taxpayer - £2.8 million in welfare, medical and housing benefits plus his massive legal costs.

After his interminable and very expensive  trial in 2006, this was the end result:-

Other "crimes" include direct and indirect involvement in fatal terrorist activities in, amongst other locations, Yemen. America accuses him of several other terrorist crimes that have yet to be teased out which is why at long last he is to be extradited from our fair shores. Now America can pick up another enormous legal tab. Sometimes "justice" doesn't seem like justice at all - especially when the legal system is being manipulated by someone who clearly has so little respect for our ways or the rule of secular law. Old Abu won't be missed. Will he?
- October 05, 2012