Almost a year ago, I posted positively about the death of British TV's eccentric Sir Jimmy Savile. Now I feel that I must apologise about that post because last November his many skeletons had not emerged from  the stinking cupboard of his private life. But now they are well and truly out and the whole country has had to radically revise its view of this "roguish and flamboyant" celebrity.

Overseas visitors to this blog may now be flummoxed, so let me explain. Conservative supporter Jimmy Savile was eighty four when he died. He was the first presenter of BBC's seminal weekly contemporary music show - "Top of the Pops". He was the face behind Britain's national safety campaign for car seatbelts - "Clunk! Click! Every Trip!" and he fronted popular family programmes such as "Jim'll Fix It" in which viewers' dreams came true. He was a member of MENSA. He ran marathons for charity and was an enduring supporter of Leeds General Infirmary and the National Spinal Injuries Unit at Stoke Mandeville, But something else was happening in the murky shadows of his life over a period of perhaps six decades.

He was a serial abuser of teenage girls - some of them as young as thirteen. He took advantage of his fame as if he were bulletproof and used his cunning to make many of these girls think that they themselves were to blame for his cynical predation. So many stories have emerged and if Savile were alive today. it wouldn't be Guy Fawkes dummies we'd be burning on Bonfire Night, it would be the Savile Monster himself. He has blighted many lives. Some victims of sexual abuse are able to put the horror behind them and lead pretty normal lives but the majority will carry that weight to eternity.

I am lucky. When I was a child, I was loved but never abused. However, during my career as a teacher  I encountered several children who were badly damaged by abuse.One of them killed herself - plunging from a block of Sheffield flats at the age of thirteen. What a waste.

Last week, Savile's family had his elaborate marble gravestone dug up and destroyed. It had occupied a commanding position in Woodlands Cemetery, Scarborough. A cliffside path previously labelled Savile View had its sign removed and even the Jimmy Savile Charitable Trust will be closing down or changing its name out of respect for the predator's victims. They suffered in silence and solitude, fearing that they would never be believed and realising they had no physical evidence to prove Savile's wrongdoing but since the ITV documentary "Exposure: The Other Side of Jimmy Savile" was screened on October 3rd more and more victims have bravely stepped forward from the shadows.

Society is wiser about abuse these days. There are more safety nets and much more awareness than there used to be. That's one of the shocking side issues about Savile's gross litany of abuse. Even in this more open climate, he had to die before the truth would out. For the dead, we often say R.I.P. but for Savile the blessing should instead be W.I.T. - Writhe in Torment. 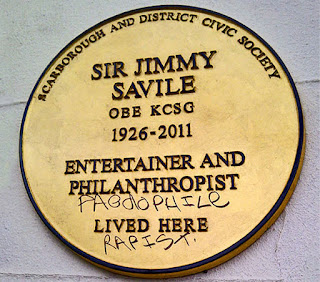