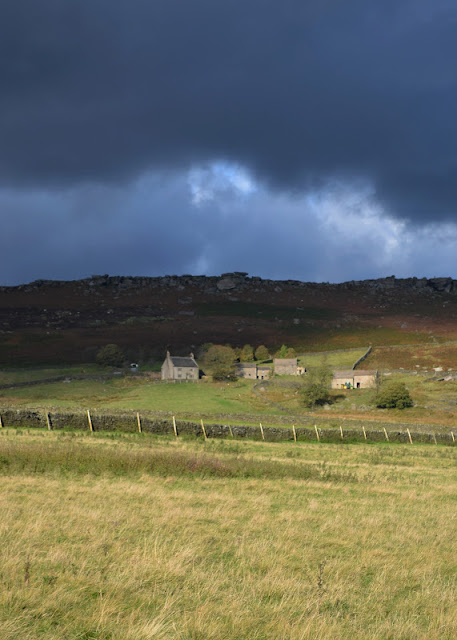 Yesterday afternoon. Driving home from a ramble near Tideswell. I decided to take the back road from Hathersage which would lead me past Stanage Edge and across Burbage Moor. Weatherwise, it had been an odd afternoon with a mixture of scudding clouds and crystal clear October sunshine. At one point, my face had even been lashed by very fine hailstones as I followed the path to Pittlesmere Lane from the Bronze Age burial site on Tideslow.

I have photographed Overstones Farm before - like many Peak District visitors- for it is located in a popular walking area just three miles west of Sheffield.. It sits beneath the exposed millstone grit escarpment of Stanage Edge which nowadays is much frequented by rock climbers in Ford Fiestas. In the past, it was used as a quarry for millstones and you can still find many discarded or broken millstones beneath the two mile long edge.

I pulled in to a passing place, watching the angry raincloud swirling eastwards like smoke from a forest fire. Waiting by the drystone wall with camera at the ready, I hoped there'd be a moment when sunlight would  theatrically illuminate the farm buildings against a shadowy background of cloud and jagged millstone and then it happened... I am rather pleased with the result. What do you think? There was also this "landscape" version which you can enlarge by clicking on it:- 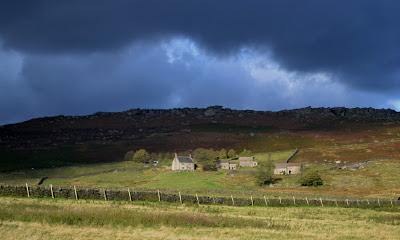