...and so after visiting Bolsover Castle, we had a little look at the town itself before strolling off into the countryside. The Remembrance Sunday ceremonies were still in full swing by the town's well-kept war memorial. It seemed that everybody had turned out including the yellow-capped brownies over whom I peered. Oddly, the two minute silence happened at midday and not at the usual eleven o' clock on the eleventh day of the eleventh month.

We had hot drinks and jacket potatoes in "The Cavendish" before setting off along Moor Lane, past the entrance to Bolsover Town's football ground - "The Field of Dreams"  and then across the fields of earth, following ancient rights of way to the delightful village of Scarcliffe. We passed by the source of the River Poulter and along grassy Poulterwell Lane to Palterton, then back northwards along the limestone ridge to Bolsover. There we visited the antique centre in what was once a grand public house and Shirley went back to the castle to buy a set of English heritage chutneys as a Christmas present for Alison - a friend and work colleague.

And finally, let us return to the castle for those (mentioning no names) who like to see pictures of little boys weeing. You know who you are:- 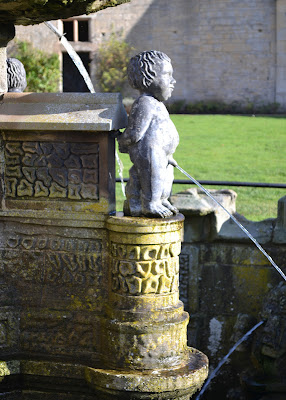