The Quran doesn't support a veto on pictorial representations of Muhammad. That restriction has evolved - principally through the Sunni Islamic tradition. It has been far less vehemently upheld in the Shi-ite tradition. Though pictorial depictions of the so-called "prophet" were never as plentiful as images of Jesus and Buddha, they were nevertheless produced quite frequently without much fuss right up until the nineteenth century.

It is interesting how religious practices alter with the passage of time - rather like the animals' commandments in George Orwell's "Animal Farm". At first it was "All animals are equal" but it later became "All animals are equal, but some are more equal than others" as the pigs took control.

There are many pictures of Muhammad. Perhaps those adherrents who protest about pictorial representations are trying to prevent  idolatory but Muhammad is idolised just the same. If not what are the obligatory pilgrimages to Mecca all about?

Today "Charlie Hebdo" again and very defiantly depicted Muhammad weeping on its front cover. Above his image is the slogan "All is Forgiven" and if Muhammad is anything surely that is what he must be about - love and forgiveness - not poisonous interactions on the internet, not Kalashnikovs and bombs strapped to ten year old girls, not alienation and anger, not the cruel assassination of a Muslim policeman pleading for his life on the streets of Paris.

The sooner all these religious bigots - Islamic, Christian, Jewish, Hindu and Buddhist - see the light and turn to atheism the better. It is so hard biting your tongue and being endlessly tolerant of folk who subscribe to illogical two thousand year old religions. That was then but this is now:- 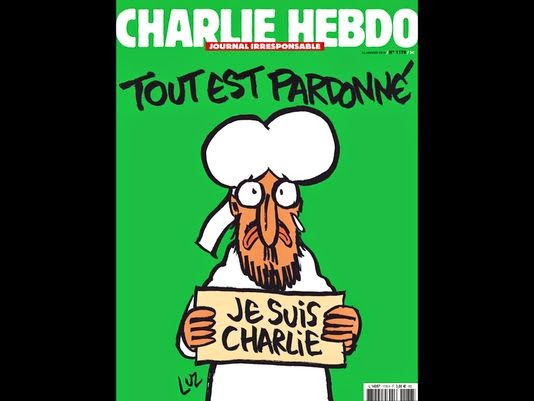