At last, I have plucked up the courage to take a deep breath and admit to you that I am a newsoholic. Looking back, I think that the first signs of this addiction were present years ago. I must have been six or seven when my mother and father bought our very first television. Not for me "The Woodentops" or "Bill and Ben", it was The News I wanted to see - flickering away in temperamental black and white - live from London. Well-spoken middle-aged men in ties with plummy voices. What they were saying was important. Suez, Harold McMillan, The Profumo Affair, The Assassination of John Kennedy.

In the intervening years there have been times when I have gone cold turkey and deliberately avoided The News for weeks, maybe months on end. And you know what it didn't do me any harm at all. In fact, it might be argued that life is simpler, happier, more natural when you have your news blinkers on.

Wasn't that how human beings lived for thousands of years? When Krakatoa exploded, when ancient Egyptians were building their pyramids, when Mongol hordes were galloping from the east most human beings on the planet knew nothing of such things. They were too busy surviving and operating within their immediate communities. Besides there were no vehicles for the spreading of news - just word of mouth and that might take years to reach you.

In the forests of medieval England, news of what was happening in London or even in the next settlement arrived very slowly. Many weeks might pass by...

"Hey, Terrowin, have you heard that we have got a new king? He's called King Stephen."
"When was he crowned Gorvenal?"
"It was about three years ago. Another one of those French ponces."
"Righto, let's get back to gathering these hazelnuts.Then we can do some witch dipping at the village pond." 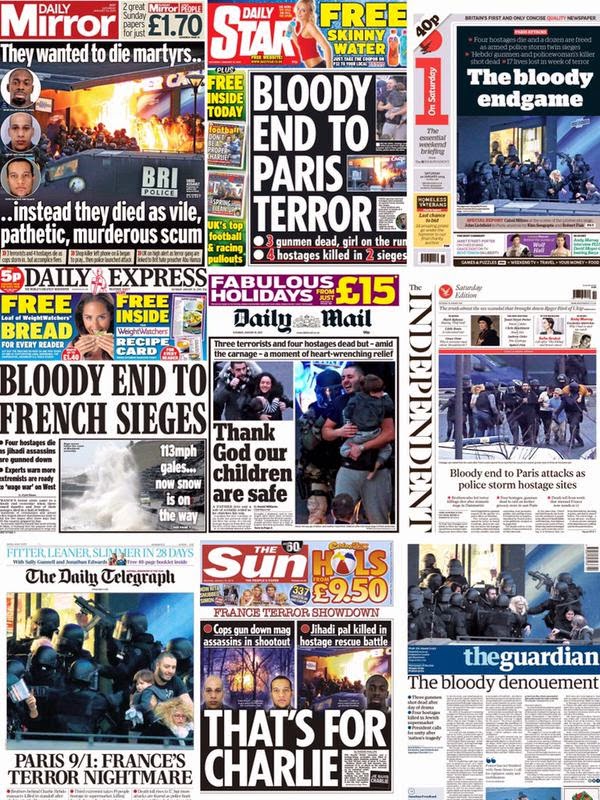 Of course today we have twenty four hour news on the television. Something good or bad happens in Cairns, Queensland or Sloughhouse, California and we all have the opportunity to know about it within an hour or so. There will even be live footage from the scene - "Gun Crazed Chicken Farmer Kills Five in Rancho Murieta Shoot Out", "Cairns ICT Teacher Wins Nobel Prize". News is on the radio and websites. It's in social media and it's becoming almost instant.

These days I seem to require regular news fixes. Radio 4 when I wake up in the morning and when I am cooking in the evening. Even when covering the Yorkshire Pudding manly physique in soapy suds in the shower I will be listening to the bathroom radio. On the car radio too. And there's often such crap on the TV that I frequently find myself flicking to Channel 130 on Freeview to watch the rolling BBC World News.

Psychologically, it's probably not good for us. The news is dominated by disaster - wars and deaths, diseases and economic nightmares. Just as we feel things in everyday life about family or friends so in spite of ourselves we feel things about these news stories. They get under our skin and it can be both confusing and depressing - especially as we can do almost nothing to influence those developing stories. We are only dumb bystanders.

I wish I had the courage to book a long stay in a newsaholic rehabilitation centre - being weaned off my addiction in a news-free environment. I would play my guitar, take up painting again, read books and listen to music, sometimes trudging around the rehab centre's woodland gardens in my carpet slippers with  other desperate patients, looking for hazelnuts.
- January 20, 2015