He's on display in the Silkeborg Town Museum in Denmark - Tollund Man. He was strangled for an unknown reason and buried in boggy ground in the foetal position. That happened about 2250 years ago. And there he lay in the peaty ground until 1950 when some turf cutters found him. The chemistry of the peaty soil had done a remarkable job of preserving his body even though his outer skin had been turned a leathery brown. 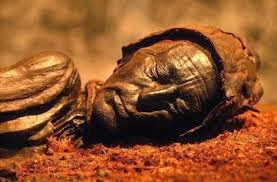 He was still wearing his simple leather hat and leather belt but it is presumed that his organic clothing had dissolved long ago in the acidic peat bog. His neck showed a lethal injury consistent with strangulation or possibly ritualistic hanging. He was roughly forty years old.

Of course Tollund Man is not unique. Other bog people - men and women - have been found in Denmark and other countries too - including Ireland and Germany. There are probably many more still waiting to be discovered. One of the things that I find especially fascinating about these Iron Age bog people is their diet. Forensic scientists have carefully examined the contents of their guts and findings have been remarkably similar.

In Tollund Man's case numerous traces of barley and flaxseed, false flax and knotgrass were found. The last two grew in the wild, whereas barley and flaxseed were cultivated in fields. Traces of other weed seeds were also found in the stomach contents - some of them had probably been gathered, whereas others may have been mixed in by happenstance. The investigators were able to recognise approximately forty different kinds of seeds.

To sum it up, his last meal probably consisted of some kind of porridge or gruel made primarily of grain and seeds - flaxseed had probably been added in order to increase the amount of fat in the meal. The contents showed no traces whatsoever of meat or fish. And this has been true of other bog people's stomach contents.

There were no shops, no supermarkets. Wheat growing was not widespread and potatoes had of course not yet been introduced from the Americas. Rice was waiting to be discovered in distant Asia. There was no refrigeration so meat would have only played an occasional part in people's diets. Tollund Man and the society in which he grew up must have spent a lot of time  gathering seeds and simply wondering where their next meal was coming from. It makes you think. 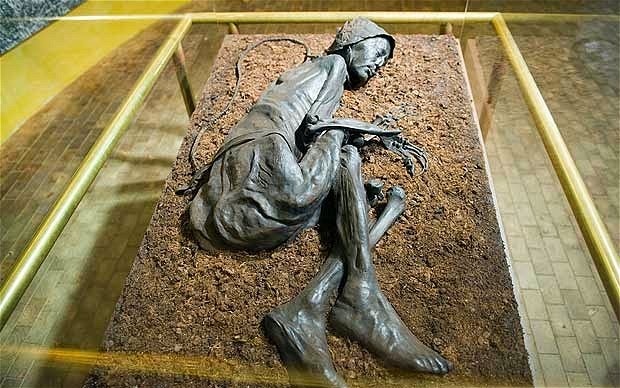