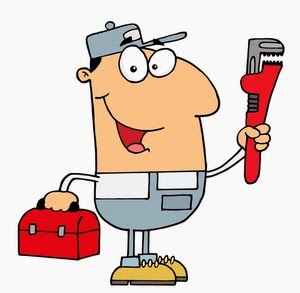 Tradesmen? You know - electricians, plumbers, bathroom fitters - people like that. Invariably they are men and when you find a good, reliable one he is worth his weight in gold. The demeanour and attitude of some tradesmen give me the impression they their opinions of themselves are as lofty as their bills. Their hourly rates are usually way above what a teacher or a practice nurse might hope to earn.

In 2013, we got a fellow in to revamp our downstairs shower room. He came highly recommended but in spite of charging the earth for his work, he left various problems behind. The light above the sink was upside down and off centre but I was able to sort that out myself. The expensive new bi-fold door for the shower cubicle was put in the wrong way round. His tiling was pretty good but he moaned that he couldn't complete the little column of small marble accent tiles because of their gravitational slide so I had to finish that off myself. But the worst thing of all is that the lavatory leaked. I got him back three times to address that problem but he never did sort it out properly and even had the gall to suggest that the leak was in our imagination. How can a little puddle of water be imaginary?

My friend Big Mick - a retired plumber - kindly sorted out the wrongly fitted cubicle door and tried his best to solve the leaking lavatory problem. In the end we reckoned that the original bathroom fitter may have caused a hairline crack at the back of  the porcelain unit.

So I had to get somebody else in to fit a second close-coupled lavatory. Oh Good Lord! Finding that man was such a mission. For example, one recommended plumber came to check out the job and after much humming and harring said he could do the job when he returned from a week's holiday in Wales. He would phone me. Trouble is he didn't and when I phoned him he said he had taken on two big central heating jobs so he wouldn't after all be able to fit our new lavatory before Christmas.

And there were others who made promises but didn't keep them. Didn't reply to emails or answerphone messages. Said they'd turn up at a particular time but didn't. Said they'd get back to me in the evening but didn't. I was starting to think we had been blacklisted by The Tradesmen's Mafia until I finally got in touch with Dan Campbell. He came to check out the job the next day and by the end of the week the toilet was in - at a fair price and what is more important - it wasn't leaking.

Dan could teach the rest of his "profession" a hell of a lot about how to deal with customers - providing good service at fair prices and keeping promises. I mean how would these tradesmen react if they turned up at Shirley's health centre and she turned them away with lame excuses - "Yeah, I can see you've got a severe chest infection but I 've got a lot on at the moment, I'll be in touch."  And how would they feel if their child's teacher said, "There are thirty others in his class. I am afraid I haven't got time to help him with his Maths. I might be able to fit him in next month but I'm not promising anything."
- January 27, 2015