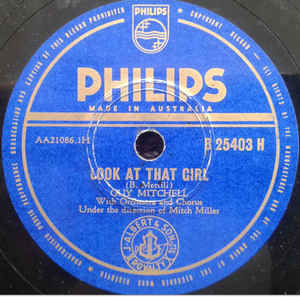 Of course today is a special day of celebration over in Welsh Wales. It's John Gray's birthday. The bunting will be out in  the village of Trelawnyd.

Yesterday I wondered what was "top of the pops" on the day that John and his twin sister Janet first appeared in this world. It was Elvis Presley's "Good Luck Charm".

The British hit parade was first established in 1952, the year before I was born. Having looked up John's birthday hit, I wondered what was number one on the day that I was born. It was "Look At That Girl" by another American artist - Guy Mitchell.

Then I went seeking out this song on "You Tube" and having listened to it a couple of times I must say that in my humble opinion it is bloody awful. Did people really like this kind of stuff back then?
Look at that girl, you see what I see?
Oh look at that girl, she's walking straight to me
That's right, last night I held her tight
Ho ho it happens all the time
I look at that girl, and I can't believe she's mine...

It's like a piece of ancient history. Popular music has come a long way since then. Do you know what was "number one" on the day that you were born? Apologies if you were born before 1952. By the way the American billboard chart was established earlier - in July 1940. Please report back.
- June 01, 2017