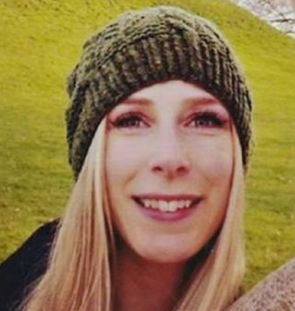 The first victim of the London Bridge horror has been named. She is Christine Archibald, a thirty year old Canadian. She was originally from Castlegar, British Columbia but she came to Europe to be with the love of her life - Tyler Ferguson.

I imagine them strolling across London Bridge as the last vestiges of a summer sunset sparkled upon the surface of The River Thames. I imagine them hand in hand bound for a riverside bar where perhaps they would meet up with friends. I imagine them thinking briefly that  in all their life they had never been so happy and then turning to see a white transit van mounting the pavement driven by the disciple of a wicked death cult. And I imagine the deadly thud and how everything changed in an instant.

Stunned by Chrissy's death, her grieving family have recorded the following statement:-
"We grieve the loss of our beautiful, loving daughter and sister, She had room in her heart for everyone and believed strongly that every person was to be valued and respected, She lived this belief, working in a shelter for the homeless, until she moved to Europe to be with her fiancé. She would have had no understanding of the callous cruelty that caused her death.Please honour her by making your community a better place. Volunteer your time and labour or donate to a homeless shelter. Tell them Chrissy sent you."

Her parents, Greg and Barbara are retired schoolteachers and she also leaves behind a twin sister called Caroline.

That heartbreaking yet dignified and generous family  statement says it all... "Tell them Chrissy sent you". I shall.
- June 05, 2017