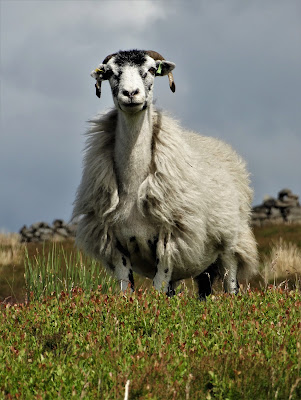 At the start of this month I made a blogpost called "Edge" in which I reported a little ramble I had undertaken to the southern end of Bamford Edge.

Following the expedition I was inundated with messages from all over the world urging me to investigate the northern end of the ancient millstone edge that overlooks the valley of The River Derwent. My Twitter account was burning bright with all the requests and my e-mail inbox was full to bursting.
Not wishing to disappoint I set off yesterday, parking my trusty vehicle "Clint" near Cutthroat Bridge on the A57. Boots on, I set off through a pine grove to Jarvis Clough, along an old grouse shooters' track. Grazing sheep and their growing lambs were suddenly disturbed by my advance and darted off into the fresh green bracken or down the slope towards the moorland stream that runs at the bottom.
Up the track,to the top ridge of  Hordron Edge, puffing and panting till I could see the escarpment of Stanage End far across Moscar Moor. To the west I noticed a line of grouse butts squat against the horizon and a long broken wall. Up on to Bamford Moor and then a mile over that slightly undulating plateau. At one point the deceptive ground became boggy and I found myself squelching along, hoping not to sink any further. I had gone too far across this area to turn back. As I am now writing this blogpost you will realise that I survived and am not still stuck in the middle of the moor shouting "Help!" to the empty void. 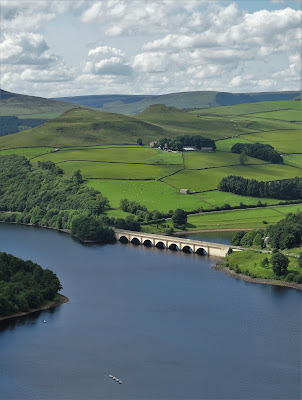 Before too long I was back at Bamford Edge, looking down on Ladybower Reservoir. What a delightful view! Then I headed south to Great Tor and from there I could look further southwards to the section of the edge that I visited on June 2nd. The dots had been joined up.

I made it back across the moor without squelching through The Indiana Jones Bog challenge. Back to Jarvis Clough and along the track that led through the pine grove to trusty "Clint". There I swallowed half a litre of cold water in one gulp - like a human syphon. I had been out three hours and hadn't seen a single soul. Fortunately I had some dry socks in the car.
- June 10, 2017