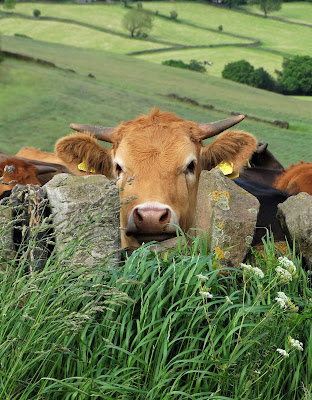 Yesterday afternoon, as I returned from a stroll to The White Stones above the reservoirs at Redmires, I noticed a little herd of cows gathering by the lane where my car, Clint, was parked.

I have taken photographs of these particular cows before and as I approached a frisson of excitement spread amongst the bovine beauties. Speaking in cow language I heard them say variously, "Oh, I do hope he snaps me today!", "Get out of the frigging way Daisy!" and "He likes it when  we look over the wall!" 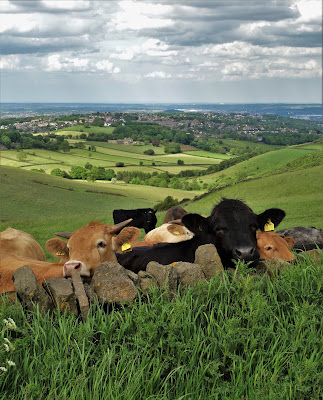 Naturally, I was willing to oblige and before driving home to make chorizo and tomato pasta with salad, I took several pictures of the young ladies. Sometimes you could see the affluent suburb of Fulwood behind them.

I wonder if I could have taken those three wicked London terrorists up to The White Stones and shown them the cows and the view and asked them to listen to the skylarks and to tread quietly as a weasel peered from the drystone wall and to see the bog cotton in one particular area of the moor like a snowdrift and taken them home for chorizo and tomato pasta then down to the pub for a couple of pints of Tetley's bitter... would they still have done those terrible, inhuman things in the name of their "god"?

Our lovely daughter Frances works in The Shard. She takes a tube to London Bridge Station almost every work day and she often visits Borough Market. She is kind and tolerant. Why would they have stabbed her? What for? Sometimes, I think it would be nicer to be a cow grazing on a hillside just west of Sheffield oblivious to it all. 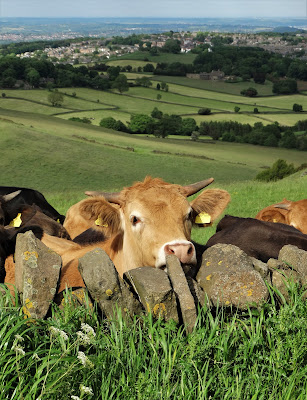