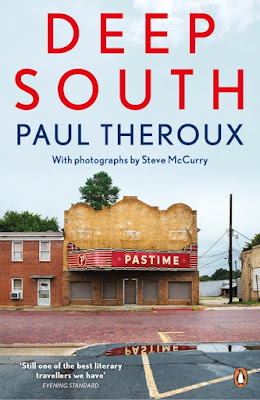 Here's Paul Theroux writing about the Mississippi River near the end of "Deep South":-


Some days in the Delta the river was the only vivid feature in a landscape that seemed otherwise lifeless - no leaves stirring, no people in motion, cattle like paper cutouts, hawks as black as marks of punctuation in the sky; the monumental stillness of the rural South in a hot noontime, all of it like a foxed and sun-faded masterpiece of flat paint, an old picture of itself. (page 434)

The book is a travelogue but it does not involve a faraway journey to a an exotic land. Instead, Paul Theroux rides about in his car, exploring a part of his own country with which he is unfamiliar -  the so-called "Deep South" including the states of South Carolina, Alabama, Georgia. Mississippi and Arkansas. There he finds poverty the likes of which he had only previously seen in Africa.
Though this is still The United States of America, it is a very different country from the world he has known up in the Yankee north east. Old industries have died and once proud towns are in decline. Black and white exist in different circles  There's a stillness and a certain melancholy in the landscape as if everyone is waiting for something to happen, something that will change things for better or worse.

On his travels, Paul Theroux meets civic leaders and farmers, bosses of well-meaning social enterprises and people who seem to have simply been left behind by the tide of modern times - like rotting rivercraft on the shores of the mighty Mississippi itself. He comes to appreciate the humility and friendliness of The South even though he is pained by the disturbingly obvious deprivation.

Over the years I have read several books by Paul Theroux, including "The Old Patagonian Express", "The Great Railway Bazaar", "The Happy Isles of Oceania", "The Kingdom by the Sea", "The Mosquito Coast" and "Hotel Honolulu". For years he has been a great observer of human activity and is perhaps best known for his travel books rather than his fiction.

Down in America's southern states, during months of travel, only two people he met had heard of him or had read any of his work. He found this immensely humbling and appreciated the freedom to look and learn that his anonymity allowed him. In "Deep South" he had a way of looking at things that might not have been my way if  I had zigzagged through that same countryside but I found the book informative and insightful, taking me to places I will probably never visit, meeting people I will never know.