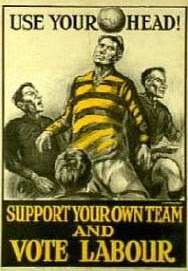 In Great Britain this very day a General Election is happening. In my opinion it is the duty of every citizen to vote in elections and I scorn those who opt out for reasons that are generally quite pathetic. The election was called by the current prime minister - Theresa May. She probably called it because over-confidently she imagined that at this particular point in time she could increase and fortify her majority.

During the seven week campaign she has come across as awkward and evasive. She has dodged interviews, debates and direct questions. Her strategy appears to have been - say "Strong and Stable" as many times as possible and I'll get in. She also thought she could win votes by denigrating the Labour leader - Jeremy Corbyn - painting him as an incompetent clown. It hasn't worked.

In contrast, Jeremy Corbyn has come across as a man at ease with himself and his radical manifesto. He has been greeted warmly by large crowds of supporters and has faced up to the questions, the debates and the interviews. He is an archetypal man of the people whereas Theresa May looks like she'd be happier sipping tea at a village whist drive.

I have voted in every election I was ever entitled to participate in and I have always voted for Labour. It is in my blood. Historically, Labour is the only party that has stood up for ordinary folk. They invented the National Health Service and working with trade unions they brought about massive improvements in  wages and working conditions. They built the state education system. They introduced the minimum wage. For me it is Labour every time.

It is likely that May will scrape home and Labour will again be runners-up. If it weren't for the rise of the SNP in Scotland we would probably be back in office. However, I am proud of the campaign that Jeremy Corbyn has led and for presenting a Labour manifesto vision that is not mealy-mouthed and watered down. He's a better man than previous Labour leaders Ed Milliband, Gordon Brown or Tony Blair ever were. As the poster said - USE YOUR HEAD! VOTE LABOUR!
- June 08, 2017